By Heather Iacobacci-Miller May 17, 2012
Morning Run
The 5:15 wakeup call came awfully early this morning. I did not want to peel myself out of the warm, comfy bed, but Jason and I had a rundate scheduled.

We definitely didn't try to push the speed today like we did the other day, and we avoided the route with the insane number of non-stop, where did they come from hills. The first mile was the slowest (it almost always is) at 9:22.

We picked it up a little bit, but nothing crazy. Although, there was one hill at mile 5 that we were pushing through like crazy fools - 8:05? WTH? Not sure why, but we have a tendency to power up hills. It sucks. It hurts. We bitch, moan, complain, but we go faster. Clearly we have some issues, but at least we're in sync I suppose.

Overall, we averaged right at a 9 min pace for 5.5 miles. Not too shabby for a Thursday morning if you ask me.

Using up Veggies
The only downfall - my eyelids were closing tight on me by 1pm. It was all I could do to stay upright the rest of the day. This of course also meant I didn't feel like cooking tonight. I just wanted to park my butt on the couch.

However, we have some fresh veggies that we must use up before we leave for vacation. Some things I can leave for my sister, but I know she can't polish it all off on her own.

We had portobellos, more squash and zucchini, and bell peppers. I had originally thought about just roasting them (gas tank ran out for grill) and tossing with pasta or quinoa. But I didn't want to make more leftovers.

Jason suggest stuffing the mushrooms. So I just sauteed onions, bell peppers, squash and zucchini and tossed on some quinoa and some cannellini beans (that I had opened to use for lunch). I lightly mashed the beans, then added in some feta cheese and filled the mushrooms. I baked until the mushrooms were soft. 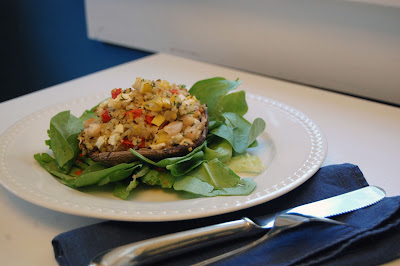 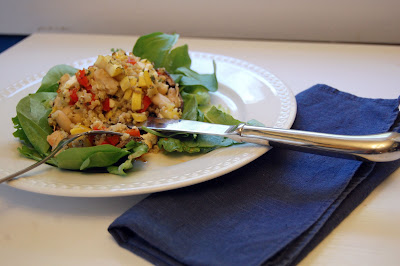 The rest of the evening was spent trying to finish laundry, finish packing, cleaning the house, and eventually relaxing briefly before bed.