By Heather Iacobacci-Miller June 13, 2012
Back/Tris
I came really close to running this morning - just a short 2-miler. But I realized I have actually run every day since Friday. Um, that'd be 5 days in a row (6 if I ran today).

Normally I try to run every other day. I'm clearly injury prone. But, I think a lot of the previous problems came with not varying distances much. I either ran a long run or I ran 6-milers.

There were never 2- or 3-milers. Rarely even a 4-mile run. Sometimes if a training plan called for say an easy 2 one day then 6 the next, I'd combine them for an 8-miler.

So, I found it interesting that running the following over 5 days hasn't left me with tired legs, no additional pain or soreness even:

It's definitely not something I set out to do, nor is it something I'm going to do often. I certainly don't need to test the running gods that's for sure. But maybe I've been wrong with my hard and fast (made up on my own) running rules. Maybe it really is ok to break the rules sometimes.

What rules have you broken recently?

Since I didn't run, I did hit the gym for back and triceps. I went with 2 supersets that I did as 4x8 unless noted then followed up with dropsets.

Blah
Today was one of those days that started off on a higher note but definitely trailed off rather quickly. By early afternoon I was ready for it to just be done and over with. And maybe a hard core happy hour if I'm being totally honest.

I thought that maybe a nice dinner complete with wine, maybe even sitting out on the patio would be a nice change of pace from the typical evenings - especially after a long long day. A nice, relaxing way to unwind and decompress. But, in the end, Jason had to work late so visions of happy hour in or date night in sort of vanished for me.

I really didn't want to get bogged down in the kitchen. It was almost a cereal night because I was just down and not enthused by the end. And my tummy had been bothering me a bit throughout the day anyway. It was one of those really weird, not hungry at all, bloated feeling days. Just blah.
I tried to convince the pups to cook for me, but clearly they were feeling the same way tonight: 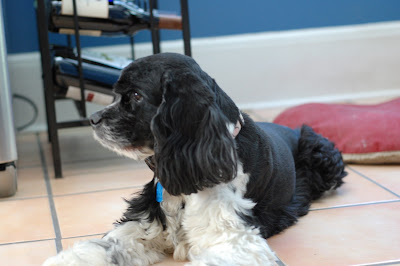 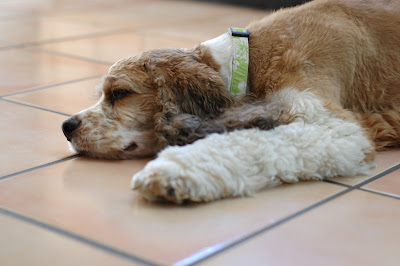 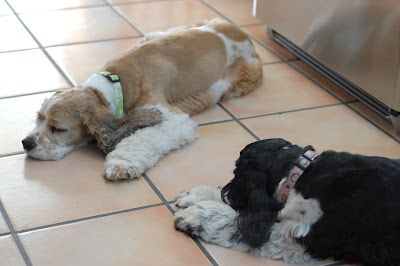 With unhappy tummy, I really wanted something fairly light and healthy, but easy. So I went with a Portobello & White Bean Salad.

I sort of based if off a portobello salad I get at a place called Bosco's. I marinated some portobellos in a balsamic vinaigrette then just roasted them in my toaster oven. I topped the salad with white beans, roasted red bell peppers, artichokes, and sundried tomatoes and a simple balsamic vinaigrette. 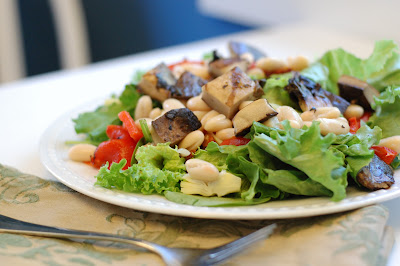