By Heather Iacobacci-Miller June 25, 2012
Double Monday
Today we decided to try moving our interval run to after work. Now, with the heat we're having (100+ degrees), not sure if it was smart or not to be honest. Actually, just going to admit that it wasn't the smarter choice.

The one good thing about in the evening is that the sun isn't as high in the sky. I guess there are a few positives like not spending two hours post-run sweating at your desk. Oh and we can jump in the pool right after the run to cool off too.

So, instead of the run at lunch, I went ahead and did my biceps/shoulder workout. I wasn't sure if I should do it at lunch or try to get it done before the run. But I figured it'd be better to not already be really hot before going to run.

Since my gym officially closes this week, I decided to just do the workout at home. I need to get used to my home workouts again for a bit until I figure out a new gym. I went with supersets of 3x8.

I also did a short bit of Cathe's MMA Boxing DVD to hit my abs. I hadn't done preacher curls in ages so I started with the weights I used to use. I was very happy to have to increase the weights. Such a great feeling. Definitely had some strength gains.

By the time Jason got home from work, the temps were soaring into the double-digit range. I will admit that I was a bit trepidatious about attempting our planned run. I've run in the mid-90's so far, but not 100's. I knew it wasn't going to be easy.

We definitely had to take it slow and take extra water with us. And the backup plan was to do fewer intervals if needed and walk home if needed.

For the run, we went with the typical 1-mile easy run over to the park where we've been doing intervals. However, today we chose the front lawn as it's a lot larger/longer and would allow us to do 40 second sprints vs the 20 seconds we've been doing.

It was 103 degrees when we set out for the run, but the humidity was at least down. The first mile really wasn't that bad. We have been running in the heat for some time now, so it's not like we're not fairly acclimated (this is the ONLY reason I even went for the run). I also spent most of the day making sure to hydrate more than I normally do.

So, mile 1, not too bad. We recovered before starting the intervals - we did 8 in all which was just a little over a mile. I managed to maintain about a 6:20 mm pace during my sprints even on the last interval. We did makes sure to drink water during the rests too.

The mile back was a little more brutal. We were already hot, obviously and running west...aka into the setting sun. So, 3 miles done. Not easy, but honestly not bad. That being said, I wouldn't tell everyone to hop up and take off on a run in these temps. In fact, I think I might try to do a post about running in the heat this week. 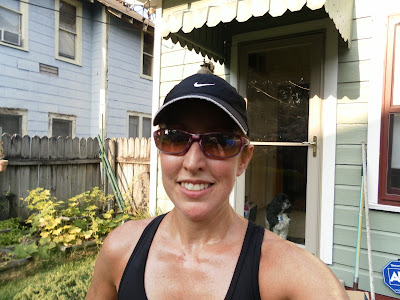 Let's just say jumping into the pool has never felt so amazing!

Dogs for Dinner
The other day, Jason hit up Whole Foods and went a little nuts. Like a kid in a candy store. One of the items he came home with was a package of Tofurky Jumbo Dogs, which we've never tried. These weren't on the menu plan for tonight, but with the later run, I thought they'd make for an ideal, quick dinner.

I did make some baked sweet potato fries to go on the side. For the toppings, I sauteed onions and bell peppers then added sauerkraut as well.

It's funny because I never liked hot dogs as a kid. But I do like some of the vegetarian versions. I guess it's like bacon, never liked that either, but love the tempeh bacon. Guess it's likely because it doesn't taste like the real deal huh?