By Heather Iacobacci-Miller June 18, 2012
Double on Monday
Today Jason and I decided to do another speed work run during lunch. This has become our normal routine on Mondays. I think the speed workouts are a great way to kick off the week. They are short, but effective. And while it's hot, it's very doable because the first and last miles are slower since the focus is on the intervals.

It was already 90 degrees when we set out for the run. 90 and super windy. But, the wind was very welcome since it was so toasty out. Honestly, I think it's good to try to get acclimated to the heat as much as possible. You can't avoid it unless you take the running inside, which I pretty much refuse to do.

Anyway, we headed over to the arts center where there is a nice park, lots of grassy area to do the intervals on. We did the same thing as last week. It basically ends up being 10 20-second sprints with a 30-40 second recovery jog (very slow). I think next week we will increase the intervals to 40 seconds for something different.

After work I headed over to the gym to get in a quick biceps and shoulder workout. I'm taking advantage of the gym as much as possible since it closes in two weeks. Then it'll be all back at the house until I find another gym.

I went with giant sets today done as 3 sets of 8 reps.

GS#2
Over head shoulder press
Lateral raise
Front to side raise (front raise, open to a T, back to front and then back to start)

This actually turned out to be a better weight session than I expected. I felt pretty strong even doing the exercises as a giant set. Definitely gave me the shaky arms for the rest of the evening!

2-Pot Dinner
I really wanted dinner to be simple tonight. I had thought about grilling out, but ended up going with something on the stove.

I made some quinoa, which is always fast and easy enough. I sauteed onions, bell peppers and a lot of minced garlic until the veggies began to soften. I then added in white wine, drained tomatoes, tomato paste and spices (salt, pepper, chili flakes, parsley, basil, oregano).

You just let that simmer and thicken and you can add in any protein of your choice like beans, seitan, tempeh. Tonight I actually went with Tofurky Keilbasa. 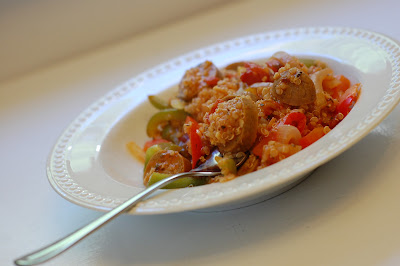 This combo is great over pasta or even on sandwiches. This is the first time I've mixed it with the quinoa. I think I prefer the texture of a pasta. The quinoa did sort of get lost with the other flavors and textures. But, not bad overall and especially not bad on the clean up front ;-)