By Heather Iacobacci-Miller June 24, 2012
Full Saturday
Well, this weekend was a full one. I feel like it was almost non-existent because it was so busy, but in a good way of course.

Saturday morning started at 7 am with a 4.5 mile run with Jason. It was a pretty good run, though really hot already. We had to rush after the run to get cleaned up and head to the lake to meet the family.

We got in some skiing. The kids weren't into any water activities this weekend for whatever reason. I was lazy and didn't even pull out the camera to get pictures of the adults skiing.

I will say that my legs and body were shaking like crazy after skiing. I swear I felt so out of shape like I've never worked out a day in my life. Apparently skiing muscles are a whole different set of muscles than I ever use or work!

After the lake we had to get home and try to straighten up the house a bit before our guest arrived. A dear friend of mine was staying the night. She lives in Virginia now, so we don't get the chance to hang out often. Her family lives about 2 1/2 hours from me though, so if she can, she tries to get here to visit me and another friend while she's in the state.

J is one of those friends that the minute we met (eons ago working at Waldenbooks) we clicked immediately and have been friends ever since. Even if we don't get to see each other all the time, when we get together, it's like nothing has changed (well except for having to catch up a bit).

We cooked in for dinner. I made a simple Tofu Thai Veggie dish that we enjoyed along with wine and lots of laughter. Again, no pictures because sometimes enjoying the moment is more important.


Relaxing Sunday
This morning I slept in...7:30...then got up and ran before everyone else got up. The heat has set in though, so it's making running a little slower. And when I run solo in the neighborhood I carry mace rather than my water bottle. I need to figure out a way to carry both.

Anyway, it was already 80 degrees when I set out for my 4-miler. But thankfully it was still a nice run despite the temps. And I managed to do negative splits with each mile (have no idea how though). My first mile was a slow one at 9:27 but then I steadily increased the pace: 9:09, 8:56, 8:53. No land-speed records mind you, but not too shabby either.

J stuck around until about 12:45, so at least we got to visit a little bit more before she had to head out. And it made for a wonderfully relaxing, laid back Sunday morning. Of course, the whole day ended up being pretty relaxed actually.

After she left, I got in the pool and enjoyed several hours of pool time. Some friends came over to join us as well. So, again, relaxing and enjoying visiting with friends. I call that a pretty successful day.

Jason got it in his head that he "had" to make chimichurri. He's been talking about it for ages, but we've just never made it. But today, he finally did. All I know is that he blended up parsley, oregano, cilantro, garlic, white onion, red wine vinegar, lime juice, olive oil and some spices. 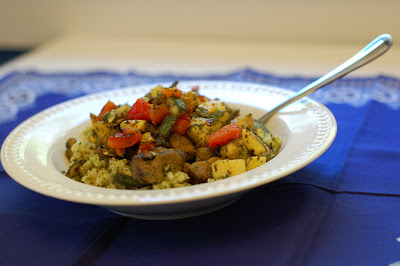 He even made a trip to Whole Foods to pick up some seitan since I haven't made any recently. So, we marinated the seitan in the chimichurri sauce and grilled that along with veggies for dinner.