Running in the Heat & Taco Tuesday


Morning 5-Miler
This morning we got up a little after 5 am to get in our 5-mile run. Apparently cooling off from yesterday meant 80 degrees. At least the sun wasn't up and there was actually a strong wind that normally would have ticked me off.

We started out on our normal route, and my legs felt really heavy initially. The first mile was a slow one. We sort of sped up for mile 2, but then mile 3 was slower again, However, it did include a lot of right and left sharp turns that really slow you down. And, we took a slightly different route thinking this new sidewalk was finished. Let's just say there was some off-roading.

The last mile was definitely a tough one physically vs mentally. I really felt like we were pushing so hard - it was up hill, down one hill, then up up up and more up before finally heading down.

I half expected the speed to be something like an 8:30 pace because that's how it felt. But it was actually an 8:57. Not bad mind you, but holy cow I thought it felt way tougher than that. I'm sure the hills, heat, and humidity all played a role.

But, 5 solid miles done before work is always a good feeling.

Running in the Heat
In light of yesterday's super hot, 103 degree run, I wanted to touch on running in the heat and safety. I didn't just head out for a run yesterday without preparing myself. I've been acclimating to the heat for a few months now, not trying to avoid it. Here, in the south, you simply can't. 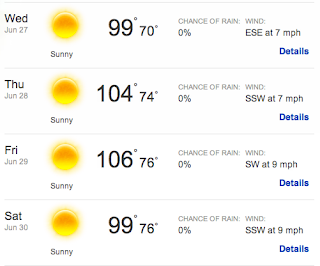 Also, I made sure to hydrate throughout the day more than I normally do because I knew the heat was going to be pretty bad. I knew I needed the extra water. I avoided salty foods as well. I made sure to slather on sunscreen, cover my head with a cap, wear my sunglasses to protect my eyes.

And even though it was a short run, I took water and so did Jason. No sharing. And occasionally splashing the water on the back of the neck really helps you to cool down too.

We slowed our pace, the intervals allowed for recovery (in the shade as well). And we had a backup plan to walk or cut the intervals short. And we had the luxury of jumping in the pool after the run to get our body temps back down.

So, from what I've read, running in the heat is doable, but you have to be careful. You have to plan ahead and play it safe. You can't go into the run trying to be some badass, "Hey look at me I ran in triple digits, I'm so cool." It's not about bragging rights. And if that's your goal, you'll probably end up sick.

I think one of the key components to running in the heat is acclimating yourself slowly. Don't just start trying to run midday in 90 degrees one day. Nope, you gotta start off slowly, start off with the early morning runs when it's warm, but not HOT. Then slowly start running a little bit later, but short distance.

Anyway, I did some additional research just to confirm that I wasn't making stuff up ;-) Runner's World has some really good articles about running in the heat as well. But they also noted that "A complicating factor for runners is that everyone reacts to heat differently." So you really do have to know your body, listen to your body, play it smart.

From all that I've read, and my own experiences, here is a list of things you should think about before heading out in the sweltering summer heat:
Lunchtime Legs & Chest
I went home at lunch and got in another leg and chest circuit. I'm kind of liking this style of leg workouts right now, especially for working out a home without the luxury of a squat rack. I did 2 different circuits 3 times through. The reps varied, so those are noted to the side of the exercise.

30 minutes from start to finish. Done and done.

Taco Tuesday
I decided to stick with the Taco Tuesday theme for an easy dinner. I do have something more special planned for tomorrow to use some of our homegrown Japanese Eggplants. But, tonight I kept it simple.

Basically it was the same salad I made last week: tempeh, black beans, onions, bell peppers, fresh corn off the cob, cherry tomatoes. I seasoned with chili powder, cumin, red pepper, salt, pepper, and a splash of lime juice.

Again, I went with just crisping up the tortillas in the toaster oven and breaking them apart rather than turning on the oven to make taco bowls. It's not like it changes the taste, just the presentation. 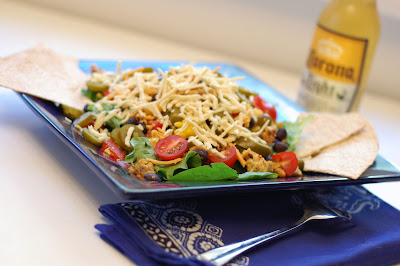 And of course you have to top with jalapenos and Daiya Vegan Cheese.