By Heather Iacobacci-Miller June 04, 2012
Saturday
I decided to do myself a big favor and disconnect this weekend. I spent virtually no time online at all. And...it was really quite nice. The whole weekend was nice actually.

We had a cold front move through so Saturday morning it was only about 65 degrees for my run. It was overcast, so that kept the temps down as well. While I love sunshine, I'm ok with cloudy for running.

I set out for my long run around 8:30. I wasn't really sure how it was going to go, how far, or the exactly route. I thought I'd just kind of go with it and see how I was feeling. My first mile was a 9:22 pace, which is what I try to do for long runs - slow and easy is the theory.

But, I tend to start speeding up a bit after the first mile, after I start settling into the run. I hit mile 2 at 8:58 and sort of scolded myself mentally. But then I realized, I was feeling fantastic. The pace was perfect. So I decided to just go with it. See how I felt. See what I could do.

I know the cooler temperatures really made a difference. When I came to the point where I needed to decide on a route (one way meant x miles and the other meant xx miles) I went with the longer route and maintained between a 9:04 and 9:08 pace.

I made a quick stop at 6.6 miles into the run to take a potty break, take my GU (Peanut butter is amazing by the way) and refill my water before heading moving along to finish out the last 3.4 miles.

My legs were itching to go faster. So I let them. I did pace myself down a bit before having to cross over a bridge (hello hill), but then picked it right back up on the downside. Mile 9 was an 8:54 pace and for the last mile? 8:41 BOOM!

It wasn't easy, I definitely was pushing myself for the last .30 mile. But I was in the zone. I knew I could do it. I was doing it. So I finished strong with a big ass grin on my face too. Talk about a runner's high. I felt strong, proud, accomplished.

So, 10 miles with an overall average pace of 9:04. Yep, that'll leave you smiling all day. 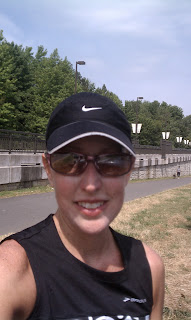 After the run, I stretched for a bit before heading home to continue to stretch and roll out. I did have to get cleaned up pretty quickly though for my manicure appointment, which was all the way on the other side of town (about 20 minutes away).

I have come to the conclusion that I am just not meant to have manicures. My first one was probably 10 years ago and it literally peeled off that evening. This time, I had a real flake. She was nice, but eventually annoying.

She complained about the lighting the entire time. Granted, it was a valid complaint, but not what I want to hear for an hour and twenty minutes. Yes, it took that long. She kept redoing a couple of the nails. 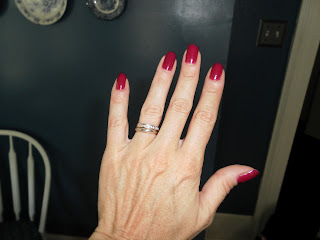 Anyway, it was nice being pampered (sugar scrub, wax treatment), but I could have easily painted my own nails in far less time and less complaining (or at least just my own complaining). But, I did love the color and how it looks now - OPI Miami Beet.

My sister came up to stay the night and was already at the house waiting on me. We had originally planned to lounge in the pool, but it was too cool and overcast. We were all starving as well, so ended up going to Pizza Cafe to sit out on their patio, plus they offer a really good gluten-free pizza crust for my sister. And seriously, how awesome does pizza and a cold beer taste after a long run?

We basically spent the rest of the evening listing to music, laughing hysterically, and just enjoying.

Sunday
Sunday I had planned on running. But the cold snap was replaced by 80 degree temps and extreme humidity by 8 am. I came really close to just sucking it up and going for a run after my sister left. Jason was going to ride his bike with a friend though. I really didn't want to go run alone in the neighborhood or drive all the way to the river to do 4 miles.

In the end, I opted for a rest day. I pretty much refused to go to the gym. There really was no point in suffering for a 4 mile run in the temperatures. I didn't want to do anything other than run, so I just decided to rest. I almost felt guilty, but then realized there was no reason to feel guilty about not pushing myself into a workout I didn't want to do or pushing myself to try for a run that I know would have been rather miserable.

Instead, I did a little bit of weeding and yard work then sat out on my lounge chair for a bit. In the end, it was sort of liberating not feeling the pressure to get in a workout "just because" and then not feeling guilty about it in the end.

We ended up meeting up with friends for a late lunch, then they stopped by the house for a bit. They needed some web help. Other than that, very low-key, laid back weekend. Oh, I did make an amazing baked quinoa dish that I will have to recreate and share.

Monday
Of course Monday came way too quickly. It always does. Jason did get up and swim. I did not get up early though ;-)

My plan was to go to the gym at lunch and do biceps and shoulders. But I was feeling whiny about it, so ended up convincing Jason to do some speed work instead. It was HOT and humid, but it was a short run overall.

We started with a mile warm up running over to where we did the intervals (we did 10 for a total of .6 miles) then ran 1.4 miles back home as sort of a cool down (though it wasn't cooling at all mind you).

I did go ahead and head over to the gym after work to get in the weights though. At least it meant a really short workout for me. I just did about 15 minutes on the elliptical to warmup then hit the weights. I went with supersets of 3x8:

I did add in some ab exercises as well before heading home.

We were planning on grilling out.We have corn that needs to be used. But, we had some major storms roll through and it was still raining after work. So, Jason said he wanted to do some sort of roasted broccoli salad. Not a clue what he really has in mind, but I'll let you know tomorrow.