By Heather Iacobacci-Miller June 19, 2012
Two on Tuesday
This morning the alarm at 5:15 was not a welcome sound. I was snoozing very soundly. How was it already 5:15??? But, once I got up and started getting ready for our run, I was awake and ready to go.

It was already 73 degrees and super humid when we set out. But, there was a nice breeze at least, so that really helped. We also kept the pace relatively slow today. Lately our morning runs end up speeding up with each mile, but today we were more consistent...maybe it was the speed work from yesterday.

The first two miles were pretty uneventful. We didn't really say much. Just running and in our respective zones basically. Maybe we were mostly still asleep ;-) The sun was coming up more by the second half though and we talked just a litte bit more.

No deep conversations mind you. Jason gets a little annoyed when I get overly chatty. In fact, last Friday he asked how my brain could work that fast at 5:30 in the morning. Um, it always works like that dear!

We purposely tackled a few hills at the end of the run. I definitely need to start doing that more often. Seriously felt like a badass sprinting out the hills for an 8:58 finish on mile 5. Not a bad way to start the day really.

And when you need a boost of energy midday...skip the coffee and hit the legs! It was another double day for me. I went the circuit route again for legs and chest at the house.

I did the circuit 3 times through, but the reps varied so those are indicated to the side.

This really went by quickly so I decided to add on 2 other exercises to focus on other glute areas and total leg as I'm really trying to get my legs and glutes balanced. I just did the exercises as supersets for 8 reps twice through.

Even with the addition of the other 2 exercises, it was still on 31 mins long.

Taco Tuesday - Sort of
Seeing as how it's Taco Tuesday, I thought I'd make Taco Salad Bowls tonight. However, it's just too hot to turn the oven on.

Since I was going to grill up corn and bell peppers for the salad, I thought I'd just toast up the tortillas on the grill and break them up and have on the side. I mean, you always just break up the bowl anyway right?

While the veggies were on the grill, I did saute some diced onions and garlic along with crumbled tempeh, black beans, and the usual Tex-Mex seasonings.

When the veggies were done, I peeled the skin from the bell peppers and diced those up then removed the corn from one of the cobs (saving the other 2 for later). I mixed all that with the tempeh, bean mixture then tossed on a bed of lettuce and spinach. 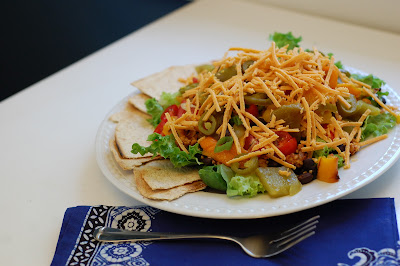 I topped with cherry tomatoes, Daiya Vegan Cheese, and lots of jalapenos.