By Heather Iacobacci-Miller June 17, 2012
One Busy Saturday
It's been another great weekend. I can't believe it's almost over. How does that happen so quickly? Yesterday was a lot of fun, but really really busy. We literally hit the ground running at 7:15 am and didn't stop until we got home at 8:30 that evening.

We got up and set out for a run early, but not painfully early for a Saturday. The plan was to do 4-4.5 fairly easy miles. What happened was the first mile was a 9:30 and the second one was 8:50. Um, clearly not the easy run I was going for.

We sort of slowed it down a little, but the average still ended up being around a 9:10 pace. It sort of set the tone for the day I suppose - go go go.

After the run we quickly cleaned up, packed up and headed out the door. We did have to make a stop at Dempsey's Bakery for Jason's mom. She can't have gluten, and really loves their bread. Since we were going to be making a stop by their house, Jason wanted to get some bread for her.

The first stop was Lake DeGray with my dad, step-mother, sister and her kids. It was a really nice day for the lake at the start, low wind, not scorchingly hot yet. The kids wanted to "monster tube" right away and that meant Uncle Jason had to be in the tube. He's such a good sport. 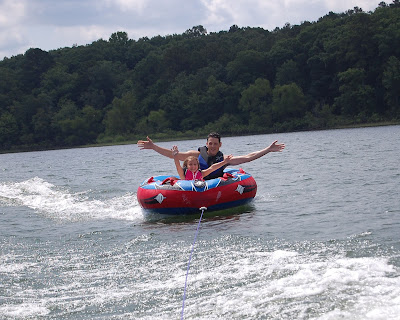 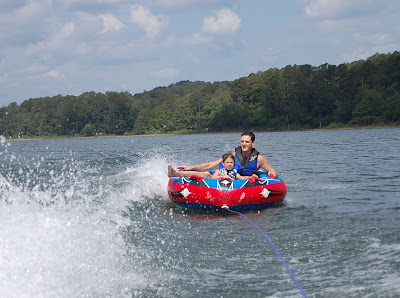 After tubing, Uncle Jason still had more water duties ahead. The kids both wanted to try to learn to ski this year. This meant Jason needed to stay out in the water with them to try to help them get up, to tell them what to do, that sort of thing. 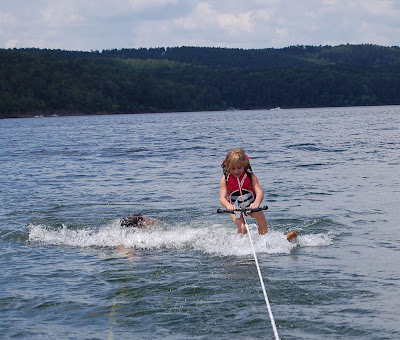 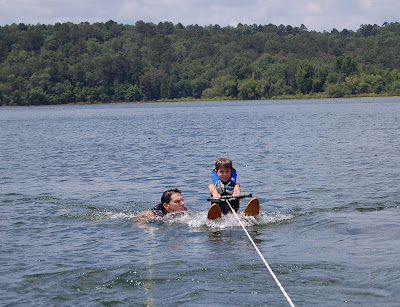 They did amazingly well for their first times. Both almost got all the way up! Maybe by the end of the summer we'll have two more skiers in the family.

Everyone was getting hungry so it was back to the shore to have a quick lunch before going back out so the adults could ski too. I decided to stay back at shore though and it ended up being a good choice. A decided to stay with me. She was really tired and wanted to take a nap.

She never napped, but talked a ton. It was really nice spending some quality one-on-one time with her though. We never really get to do that. So she happily chatted away telling me her big plans for the future. She's seriously my child - she told me she was going to move to Florida to live on the beach ;-)

After the lake, we made a quick stop by Jason's parents' house so he could drop off the bread and see his dad for Father's Day (day early of course). Then it was a mad dash back home. We had plans to hang out with friends. We were going over to their house (along with another couple) to enjoy a taco bar and patio time. Oh and we took the pups along too so they could play with Bella the Beagle.

We had such a great time visiting, relaxing, eating. I know the pups enjoyed themselves too. But Jason and I were honestly worn completely out so we only stayed a few hours before heading home to just veg out on the couch with two also very tired dogs.

Work Hard. Relax Hard.
This morning I slept in - 7:30 LOL. I got up and decided to go out for an easy run. I will call it my "engaging glutes" training run. My focus was to really pay attention to firing the glutes. And it turned out to be a fantastic run despite the heat.

My plan was 2 easy miles just working on form. The awesome thing is that when you get your form in check, the run feels like less work. So I ended up with some awesome negative splits for a great 3.5 mile run. I seriously had to just make myself stop because I could have gone all day I believe.

After the run, I did some of Cathe Friedrich's MMA Boxing DVD and abs. Then I spent a good bit of time stretching and rolling before hitting my next round of cardio: gardening and chores.

I spent over an hour trimming hedges and wedding flower beds before heading in for chores like laundry, cleaning toilets, showers, sweeping, mopping...yep, exhausted by 11:30. But the yard was looking better and the house cleaner.

My reward? Pool time of course! So, I worked hard this morning, but the rest of the day is all about relaxing and enjoying the last bit of the weekend. Work hard, relax hard right ;-)