Another Two-a-Day on Taco Tuesday

By Heather Iacobacci-Miller July 10, 2012
Two on Tuesday
This morning started off way too early. I slept fairly well until around 2am then I was tossing and turning a bit, but refusing to look at the time. The alarm was set for just after 5 so we could get up and get in a run. The plan was 6 miles (or that was my plan anyway).

I had hoped the temps would be a lot cooler after a recent front moved through. They were, sort of. It was still around 74 degrees but the humidity was 90% and the dew point in the upper 80's. In other words, it was soupy out.

I felt pretty good for the first mile, of course we were taking it slower. But I could feel the humidity start to affect my breathing. While I don't get exercise-induced asthma, I have severe asthma that has always affected my exercise. Usually, Singulair keeps me on track unless I have some major allergy issues OR extreme humidity. Singulair can't fix humidity.

Somehow I did manage do pull out fairly good times for miles 2 and 3, but definitely started slowing down by mile 4. I just had to focus on the breathing basically so that sort of negates any worries about time or foot strike - which I've been actively working on to stop the over-supination.

Anyway, Jason dropped off at mile 5. I knew I wanted to at least get in another half a mile and see how I felt. I ended up finishing it out to my planned 6. I do feel like I'm just getting slower and slower though.

My average was a 9:10. Yes, I can blame some of that on standing and waiting for traffic, or zigging and zagging...but I really think it's just me not trusting myself. Of course, I probably should account for heat and humidity if I want to throw in more excuses huh ;-)

I had originally planned on doing a leg workout at lunch, but after the dry needling yesterday, run today, and speed work planned for tomorrow, I thought I'd give my bum a break. So I went with biceps/triceps and some abs instead.

I started with supersets for bi/tri then I did supersets for the same muscle group. The first two were done as 3x8 and the last 3x10

I followed up with some ab work and called it a day. I will say that today's weights were kind of a struggle, well, the biceps. I was feeling super weak, I have been since having to move workouts back home. I'm trying to use the same weights I would have used at the gym, but they seem so much heavier.

What gives? Has this ever happened to you where you change your environment and your workouts seem to change as well (and I don't just mean the workout types)?

Taco (Salad) Tuesday
Since I had my workouts done, I had plenty of time to focus on stretching and rolling out after work. I definitely needed it.Since my injuries, I feel like I'm always on guard when it comes to the slightest pull, twinge, tightness.

It seems like I just can't get all the way healed up. If it's not one thing then something else starts to want to hurt. I have gotten out of the habit of my daily 30-minute stretch sessions. I am about to have to squeeze those back in I do believe.

Anyway, today's dinner was super easy. I just went with the Taco Tuesday theme. Rather than tacos, I opted for the taco bowl though. Still counts right? If you want to see an amazing Taco for Taco Tuesday, you gotta check out Kristina's post.

If you've followed for any length of time, my taco salad bowls get pretty repetitious. But that's ok by me; it's a tried-and-true fave for a reason right?

I did have some corn from my mom's garden to use (grilled it the other day). So I just combined the corn with red onions, yellow and green bell peppers, fresh jalapenos (from my garden finally), tempeh, black beans and the typical Tex-Mex seasonings like chili powder, cumin, cilantro. I did add in a splash of liquid smoke and lime juice to keep it from being too dry. 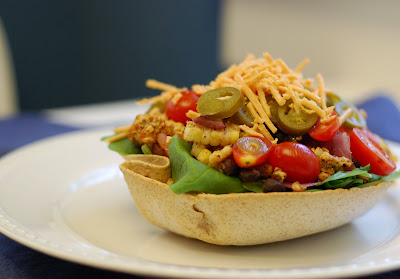 And of course I topped it with cherry tomatoes, a ton of jalapenos (included extras on the side to add as I ate), and Daiya Vegan Cheese.