Conquering My Fear of Cycling

This weekend was a good one all the way around. Saturday morning I got in a pretty good 6 mile run but the heat did a number on me big time. I should have stuck with my planned 5 miles or taken a GU at 4 miles. I normally take one around 6 miles into an 8+ mile run. So I didn't even think about needing it for 6 miles.

During the run I was ok. I did finish all of my 20 oz bottle of water by mile 5 though. Right after my run I felt fine. I stretched and rolled. Used a cooling towel to bring my body temp down and took a cold shower.

But then it hit me hard. That icky nauseous feeling that signals that I need to get in electrolytes fast. It's not about food, it's not about carbs, proteins, etc. So I had some Gatorade (which I actually can't stand) but it really helped. So that headache and nausea finally dissipated so I felt human again.

Luckily, the only other thing I had planned for the day was spending time in the pool with friends and my sister (who decided last minute to come stay the night). I will say that when it's 109 degrees outside, the pool water begins to feel like a hot tub after a point. So it's nice to have the pool option, but it's almost not even refreshing when it's that miserably hot out. Of course, we toughed it out ;-)

It was a great day with lots of laughter. Just a day to enjoy.

Conquering Fears
Sunday morning I got up and headed out for a super easy 3.5 mile run. I took it slow and steady and just enjoyed the run. No pushing for negative splits or worrying about time. It was rather nice I  must add.

Jason has been wanting me to go ride bikes with him for a while now. So, that was the plan for the day. There is a bike rental downtown - Bobby's Bike Hike - so I reserved my bike for 11:30. Jason had actually gone to the store on Saturday and bought me a pair of padded bike shorts AND gloves. I'm surprised he didn't buy me a helmet.

So, I showed up to the rental place all decked out and the guy assumed I knew what I was doing. Um, not so much LOL. But thank you for the vote of confidence. I certainly needed it. I was actually terrified.

Seriously shaky about it. I hadn't ridden a bike in at least 25 years and the bike I had was definitely not a road bike, no gears, you used the pedals to brake. Basic all the way. So to say I was a nervous wreck is really an understatement. And once I saw the bike, it was almost full panic mode. 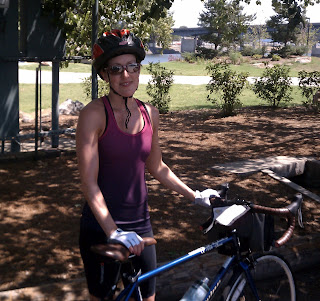 In my mind, this is what Jason and I would look like riding together.

In reality, this is how I feared it will look. Thankfully it did not. But it was touch and go for a minute.

Jason showed me how to shift the gears and where the brakes were and all that. My main focus was making sure I knew how to brake. Shifting was minor in my mind. After my quick lesson in cycling, it was time. I got on and started to pedal. It was like a child out of control and I was certain I was going to crash - and so was Jason at that moment. I stopped and was literally shaking it scared me so bad.

You've seen kids get crazy out of control swerving like mad? Yep, that was me. Jason admitted that after he saw me do that he started to have major reservations about the whole biking venture.

But, I got back on and gave it another try. Slowly, very slowly. At one point Jason said, "You run faster than this." And he was dead serious. He wasn't being mean mind you, just trying to make a point that I could probably pick up the pace just a bit.

I think he was a little bit embarrassed when other cyclists flew past us. I was trying though, that's what I kept saying. Slowly but surely I built up more courage to leave the one little area we were in.

We headed towards the Heifer building because there would be ample room in the parking lot with no cars or people to get in my way. I spent about an hour zigzagging through the lot trying to just get my bearings and figure out how to steer better. I felt so wobbly (for lack of a better word). I did workout up the courage to take the bikes across to the North Little Rock side of the river trails for a farther stretch of trail.

We did discover that my forte is powering up hills. When we were going up my first biggish hill, he looked over and said, "So that's how I can get you to go fast." Apparently my top speed for the day was going up hills. Who knew. Now going down? All about the brakes baby. I was terrified of loosing control.

After the bike riding adventure, we ended up having a late lunch at Dugan's with a much needed beer. I apologized right away to the waitress for the fact that we likely stunk. I mean, it was 104 degrees out there so while I was going at a snail's pace, it was hard not to get sweaty.

So I did it. I conquered a pretty big fear by getting on that bike. And I will say that while I wasn't ever completely comfortable, I'm glad I took on the challenge. It was really nice riding next to Jason. Just enjoying the outdoors. I can't say I enjoyed scenery though, I was kind of busy focusing on staying upright. But we enjoyed the time together and that was really nice.

What was the last fear you faced?