By Heather Iacobacci-Miller July 17, 2012
Holy Humidity
As has become typical on Tuesdays, we woke up just after 5am to get in our medium distance run. The plan was for 6 miles.

It was humid from the start, that kind of humid that makes it feel like someone is sitting on your chest. Normally exercise does not affect my asthma. Humidity, however, is not my friend. I had a terrible time getting my breathing under control this morning.

I finally started to settle into an ok rhythm around mile 2. The first mile was just getting moving really and was at a 9:31 min mile. Mile 2 we stepped it up a bit for 8:54 pace. Jason made a stop by the house and I continued on meeting him at my mile 3, which was surprisingly an 8:44 pace.

I had to stop and wait a while for 4 cars, perfectly spaced apart, just after my 3-mile point. This completely threw my rhythm out of whack. We got going again and mile 4 was 9:09 (not bad considering the extending standing and waiting time). Then my Garmin froze up on me. I didn't notice it for a while, but I looked down to see the distance (trying to determine which direction to go) and it was frozen at mile 4's lap time.

It pretty much went downhill from there (not literally, literally we were going back up hill). I started trying to get the Garmin to unfreeze. I tried to stop the session and restart, tried hitting the lap button, even tried to power it off. Nope. Nothing. So of course that threw any rhythm and consistency way off.

So not only was I ticked, I was gasping for air, cursing like a sailor and trying to figure out the distance. I couldn't even see the time to get a general idea. Now, if I didn't need to get back to the house to get ready for work by a certain time, then it might not have mattered if I was too far from the house and hitting 7-8 miles. However, I needed to get back home to get to work on time.

Jason's timer was for his running time so that didn't help a lot. But he did switch it over to the real time just so I could guess and then try to figure out how far out we were. I ended up mapping it on MapMyRun and it looks like it was 6.64 miles. That would be just a tad off from what I was thinking based on my first 4 miles on the Garmin. Not sure which is more accurate.

I'll readily admit that I got irrationally angry at my fancy schmancy device. But I just couldn't stop thinking about how it was frozen up, maybe broken, maybe dead. I just wanted to see the time for myself. Clearly I have come OCD issues going on.

Do you find yourself getting irrationally angry or upset with technology? Or do you just roll with it?

I had originally planned on  doing legs during lunch, but they were pretty heavy from the morning run. So, I went with a chest workout from Cathe Friedrich's Power Hour DVD. I always forget how that one can really sneak up on you.

The workout starts with a series of pushups that also incude rep speed changes (like 4:4 counts) as well as some where you jump your feet in then out then your pushup. Next up is chest flyes dones at a nice, slow 4:4 count. Finally you move on to presses that seem to go on forever with lots of rep pattern changes. Short, sweet, but shaky.

Simple Salad Dinner
So, I missed the boat on Taco Tuesday today. I didn't even think about it until I had dinner already started. Oh well, there's always next Tuesday right? Plus, I had some veggies that needed to be used up that didn't quite fit the taco theme.

I had a bunch (as in a lot not a single bunch) of kale that needed to be used up sooner than later. So I just went with a simple roasted kale, veggies & tofu salad for dinner.

I roasted up the kale (seasoned with olive oil, salt, pepper, nutritional yeast flakes), squash from my mom's garden, zucchini, and roasted red bell peppers (from the jar). I baked up tofu, cubed it and also added in some homegrown tomatoes and tossed it all together and dressed with balsamic vinaigrette. 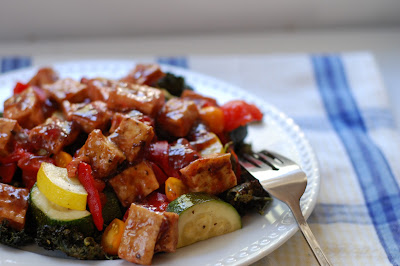 Not fancy, but tasty and filling. Even better, I now have kale for tomorrow's lunch ;-)