By Heather Iacobacci-Miller July 12, 2012
Kicking & Lifting
This morning I ended up waking up early enough to get in a workout. So I went with my new Susan Chung Kickboxing DVD. I am really loving this one. At first I was slow to get moving. My legs were feeling yesterday's workout big time.

But, once I got going, I really got into the workout. Now, let me preface the next part with the fact that my DVD player in my gym room died on me and we've yet to replace it. So, I've been having to drag the laptop into the room and use that to play DVDs for the time being.

So, I'm punching and kicking right along, sweat flying...you get the idea. Then the DVD stops. And then the computer starts a 10-minute long freaking update/reboot process. WTH? Ok I really said something a lot worse than that. Nothing worse than being in the middle of a good workout and it be halted so abruptly.

While the forever-long reboot was happening, I did get in some ab work at least. Finally the computer was up and running but of course I was totally thrown off track and had to try to figure out where on earth I was in the middle of the workout. Talk about needing a punching bag not just the air!

This is why running in the early morning hours is more ideal than trying to do anything that requires technology or equipment.

During lunch I did go home and get in a back workout. I decided to put of my shoulders until this weekend because I have a long run planned tomorrow. I have been holding a ton of tension in my right shoulder during my runs, so starting off with sore shoulders at the beginning is less than ideal.

I ended up completely ditching my planned back workout and went with straight sets of 3x8 for the following exercises with the exception of the last one.

I can't decide if the workout was a good one or not. I think I should have increased weights for underhand rows perhaps. I have a hard time really feeling the muscle work for horizontal rows, but wanted to incorporate something other than pullovers.

My Heath Man
After work I ended up hitting the grocery store. We were getting low on most fresh veggies and fruit. And while I don't really like going right after work, it at least ensures I don't have to get there on the weekend.

I really don't have any ideas about dinner tonight. I'm a little worried about my Heath Man to be honest. He started not wanting to eat his food a few days ago, just picking at it here and there, but he would eventually eat most of it.

The last time this happened it was because of his teeth, and we had those all cleaned up. But this time we were thinking it seemed like more perhaps. He's not been acting too terribly different, but Jason thought his urine looked dark.

So Jason took him in this morning. He got a call later in the afternoon saying they wanted to keep him overnight and put him on an IV. Initial tests are pointing to something being wrong with his liver function. So, needless to say, my mind is not exactly on dinner or much of anything else really. Trying not to panic just yet and hoping for good news tomorrow. 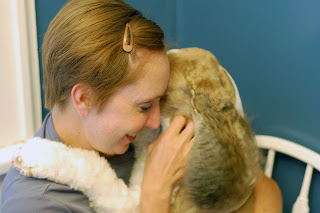 Daily To-Enjoy List:
Getting groceries out of the way
Getting workouts done early