By Heather Iacobacci-Miller July 09, 2012
Low-Key Weekend
This weekend was pretty low-key for us. I should have gotten far more done around the house than I did. I tried to keep up with laundry, sweeping (dead grass + 2 dogs = lots of sweeping), and general clean up/straightening, other than that, I was pretty lazy.

I did get in two decent runs. I did 5 miles on Saturday and 3.5 yesterday. Both were hot and sweaty and deserving of pool time. Though, I can justify pool time pretty much any way you look at it. I was pretty happy with Sunday's run. The first mile was pretty slow (9:31 mm) but I hit a good rhythm and was able to pull out negative splits with mile 2 at 8:55 then mile 3 and the last 1/2 mile both at an 8:36 mm. Not too shabby.

My first attempt at pool time on Saturday was met with clouds. We desperately need rain so I was more happy than annoyed. Of course, right after I get cleaned up the sun comes out. Jason and I ended up going for a late-ish lunch after he was finished with yard work. By that time the sun was out in full force so we both got in the pool for a few hours.

Sunday ended up being mostly cloudy, but no rain in my area. It seems to just keep going around us. Jason went for a ride with a friend and they got rained on (they were farther west), but at my house? Not a drop.

My sister did come up briefly yesterday. We ran a few errands, just piddling really. I am on the hunt for the perfect orange colored pillow shams and/or throw. Since I have something so specific in mind, it means I won't find it of course. I may end up having to go to the fabric store and just making the shams myself.

After hitting up Bed Bath & Beyond, Target, TJ Maxx and Barnes and Noble, we headed back to the house. She got some pool supplies from us and headed home. So it was a short visit but a nice one as always.

Jason and I were lazy and went out to lunch again. We shouldn't have, but sometimes it's nice to just be lazy and not mess with cooking. So, not an exciting weekend necessarily, but a good one nonetheless.

More Dry Needling
Today I went for my 2nd dry needling appointment. Last week he just used one needle in my gluteus medius area. Today he also inserted a needle in my low back. That one I barely even noticed, but the one in my rear? Yowzers.

It wasn't the insertion, but it was when he "pistons" the needle to make the muscles jump. And boy did they freaking jump. I was so worried my leg was going to fly up and somehow push the needle in and do serious damage. Thankfully, nothing that dramatic happened.

He tested my rotation strength again and it's definitely improved, but it is sore when I try to resist him pushing. He sounded like that was to be expected. So, overall, it seems to be working. I'm not waking up in the middle of the night in severe pain, but I am experiencing some achyness during my runs (towards the end....in the rear end LOL).

I guess I'll know more on how well it's working throughout the week as the initial, "just had a needle jabbed in my butt" sensation subsides.

The plan for working out had been to go home and do biceps/triceps then a 3-mile speed work run with Jason. The plan, however, depended upon how I felt after the dry needling. Honestly, it just felt bruised, and not achy like last week.

However, I realized that it's been 10 days since my last rest day. I'm a firm believer in taking those necessary days off from working out. So, even though I had it all planned out in my head how this week's workouts would go down, I decided to be kind to my body and take the day off today.

Roasted Dinner
Since I wasn't working out after work as planned, I had more time to mess with dinner. The rain has been in and out today, so I played it safe and roasted the veggies rather than grilled them.

The minute I started grilling I knew it would rain. Though, we still need the rain so perhaps I should have grilled after all. 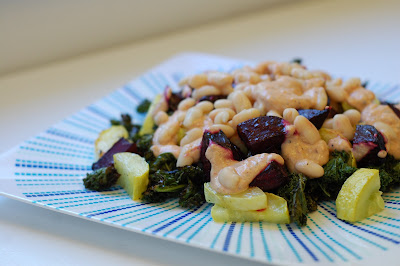 I had both kale and beets on hand along with some squash from my mom's garden. So basically that's what we had - Roasted Kale, Beet & Squash Salad with a vegan Creamy Roasted Red Bell Pepper Sauce. I did toss on cannellini beans for the protein (though kale is a great green with a punch of protein).