By Heather Iacobacci-Miller July 01, 2012
Running & Lounging
It's been a fairly low-key weekend for us. It's almost too hot to even be in the pool to be honest. When the temps are in the triple digits, it's really hard to want to do much of anything other than sit inside with the AC on and fans blowing.

Saturday morning, I got up to get in a 4.5 mile run. It was 80 degrees already at 7:15. There was no luxury of sitting around, enjoying breakfast. If I wanted to run, I had to get moving. I had planned to go fairly slow. But ended  up averaging a 9:11 pace. I told Jason I must have been trying to run from the heat.

After the run, I decided to run a few errands while Jason went cycling with a friend. Afterwards, our friends came by for some much-needed pool time. I actually ended up having to add in extra water to try to cool the pool down. 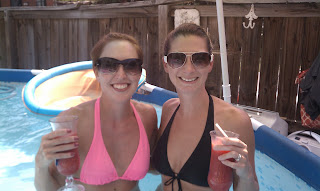 Frozen strawberry daiquiris were a nice, cold treat. Jason and I discovered that all you have to do is blend strawberries with ice and vanilla rum. No need for the sugar-laden mixes or simple syrups.

The rest of the evening was spent being super lazy, butts glued to the couch basically. I did wash some laundry, but that was about it.

More of the Same
This morning Jason and I headed out for what I had hoped to be a 4-mile run. It ended up topping out at 3.5. It was just hot. My legs were heavy. And that was that.

After the run, I did head up to my little gym room to try out a new kickboxing DVD - Susan Chung's RapidFire Results. I've been looking for a really good new kickboxing workout. I love my Cathe DVDs but you can only do those so many times before you know them backwards/frontwards and are bored. I had read some really good reviews about this one so went ahead and ordered it.

I only did two of the combos and the abs section and am super excited to do the rest. Great workout. Definitely advanced, so not half the time spent learning the combos. Just jump right in and hit it hard. Very happy with this purchase.

After the workout, I spent time in the pool while Jason went to hit golf balls with a friend. After that, we went for a late lunch. Definitely a lazy day around here. Fairly lazy weekend really, and I'm totally ok with that.