By Heather Iacobacci-Miller July 11, 2012
Sprints & Legs
This morning I had kind of sort of hoped to wake up when Jason got up for swim so I could get in some kickboxing. However, he apparently decided not to go so he didn't get up, which means neither did I.

So, the next plan was to get in a speed workout. We hadn't done a speed workout since that last wonderful one when it was 103 degrees out. Sadly, that one actually felt better than today.

We did the same set up as the last one - 1.1 mile run over to the park. Then 8 35-40 second intervals with rest between. The rest times became more sporadic depending upon the puke factor that was happening.

While it was cooler out, index 89, the humidity was insane. It felt like it should have been raining, but it wouldn't. Seriously sweating the minute I started moving. My lungs were not happy at all. I had such a hard time breathing today. I never seemed to get it completely under control.

But, I managed my intervals at a decent time somehow, miracle or delusional or something. The first 5 were at 6:21, 6 & 7 I wanted to die and slowed down to 6:40, but kicked out the last one at 6:21again. The intervals totaled a mile in distance. Then we had the 1.1 mile run back for a total of 3.2 miles.

Even after a cold shower, box fan in my face, I couldn't stop sweating to get ready to get back to work. Ick.

My weight workout plan today was going to be back, shoulders and chest. I had it all written out. But I've had this pinched thing going on in my upper back and an achy shoulders, so I figured the smart thing to do would be to not do that planned workout.

While I had a leg workout all written out, I was feeling lazy and decided to let someone else just tell me what to do. So I went with an old school Cathe Friedrich DVD - Power Hour.

It's higher reps and uses a variety of rep patterns for squats, plie squats, and static lunges. I added on the following done as a triset done 3 times through: single-leg deadlifts (10 each side), calf raises (20), and hip bridges (12). I then followed it up by a nice stretch.

Hodgepodge Pasta
Tonight I was totally wishy washy about dinner. At first I thought I might grill veggies for something undecided. But it kept clouding up like it was going to rain then clear up. Next idea was roast the veggies maybe for a salad. But we've had salads all week so far.

That left me with cooking them in a pan - not sauteeing - but simmering I suppose. This was sort of a hodgpodge dinner really. I had some veggies that needed to be used and was pretty much not in the mood to do much or be terribly creative.

So I ended up sauteeing red bell pepper and garlic until it began to soften then I added in a can of no-salt diced tomatoes and veggie broth. I let that simmer for a bit then added in Japanese eggplant from the garden, green beans from my mom's garden, and portobellos that were on their very last leg.

Oh and of course there was the tofu that I dry-seared then baked and cubed and tossed into the mix. I seasoned it all with salt, pepper, parsley, fresh oregano and basil and some red chili flakes. Then I served over pasta. 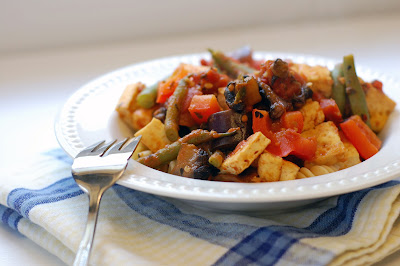 I had originally planned to use some squash from my mom's garden as well. However, I kind of ran out of room in my skillet - which was already enough food for 4-5 people easily. I have zero concept of portion control.

Daily To-Enjoy List:
Run (well, that's iffy but at least I was able to)
Relaxing evening
Watching a movie
Glass of wine (or 2)