By Heather Iacobacci-Miller July 26, 2012
Unintended Stir Fry
I didn't think I'd have anything to report about dinner last night, but I ended up accidentally making an amazing sauce that I wanted to share. It started out as a total hodgepodge dinner. I started roasting kale then Jason mentioned doing some sort of spicy "beef" and peppers dish using Gardein's Beefless Tips.

I started sauteing onions, red and green bell peppers and garlic. I added in a bit of soy sauce then wanted to add in some hoisin but thought I was out (different shaped container this time duh) so I added in a little of this a little of that, then found the hoisin.... And it turned out amazing. I also added in frozen peas and of course the Beefless Tips.

So, here is the list of ingredients for my Spicy Tahini Stir Fry Sauce (you just have to wing the amounts based on taste) 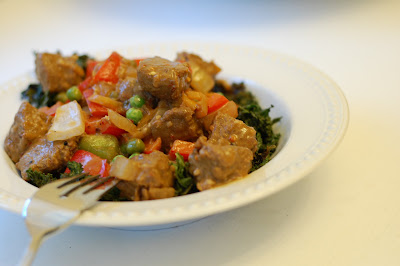 And yes, I served it over the kale. Of course had I realized I was ending up with a stir fry, I would have made rice or rice noodles instead.

Resting & Running Ruminations
Today is my much-needed rest day. I did one more dry needling appointment as well. It'll probably be my last one. I do think it's helping, but at this point I've been going to physical therapy since February. I'm kind of over it at this point.


Today's appointment was more focussed on the lower part of my gluteus maximus, almost near the highest part of the hamstring. Apparently he hit the "right" spot at one point and was ecstatic to see my muscle jump, twitch, and convulse. I, however, wanted to come up off the table.


His enthusiasm for dry needling does not go unnoticed. Especially when he knows he's managed to hit the perfect triggerpoint. All I know is that my left butt muscle was achy the rest of the day. But, I do have faith that it's helping.

Anyway, I wanted to share some running ruminations - hopefully not boring non-runners. Last Friday's fairly horrendous run made me start to think a lot about why I do continue to run and how runners get through those tough runs.

I think a lot of people are under the very false impression that runners love running because it's always great, always full of endorphins and runner's high. It's just flat out fun. I'm going to straight up call bullshit on that one folks.

Running is not easy. Running can hurt, it can suck, it can make you question every ounce of your sanity. There are days when your lungs are on fire, when your legs feel like someone strapped on invisible 40 lb weighted plates to them, when you feel like you're running in place and the universe is absolutely against you.


But somehow, it's worth it. Because when you finish those particularly trying runs…you feel pretty freaking badass too (after you recover of course). It takes a strong will to fight that urge to just stop. Trust me, running is as much mental (if not more) as it is physical.

On one shoulder you have that devil (or maybe it's really the angel depending on how you look at it) say, "What are you doing you dummy, this sucks, stop this nonsense right now, what are you trying to prove…."

Then there is the angel (or devil mind you) on the other shoulder saying, "You got this, you're not a quitter, you're strong, you're being silly, just keep moving it's almost over."

And maybe it's not really an angel and devil but more your brain and your heart. Your head is telling you, "you're crazy, it hurts, it's not fun." Then your heart is telling you, "it's worth it, you do enjoy it, you are stronger than you think you are, stop doubting yourself."

And then maybe it's flat out stubbornness that keeps you going. Which reminds me of a great post by Laura from Mommy Run Fast - Why are runners so stubborn.

I mean seriously, I know I'm stubborn to a fault. So am I a runner because I'm stubborn? Does running make you more stubborn? And, maybe being stubborn is a good thing. It keeps me going even when I completely doubt myself. Oh, and then there's that thing I like to refer to as Runner's Amnesia.

I don't know how it works, but I'm thankful for it. I might be a little scarred from a long run for a day, maybe two tops. Now, I won't totally forget the mental part, but I typically forget the physical part. And then, I lace up, and hit the pavement all over again.

Maybe it's also a bit like poker - you dealt me 1 bad run, I'll raise you 5 good runs. Because those good runs? That's what we live for. Those are the runs we relish, we remember, we brag about. Those runs that make you smile like a fool for the rest of the day, the ones where you feel like you're flying, you could run all day, that all is right with the universe. Yep, that's what keeps you coming back for more. Because they do exist and it doesn't mean that they're easy mind you, but there's something special that happens.

So, running isn't easy. It's not supposed to be is it? Sometimes it's really hard, but so are a lot of things in life. It's how you deal with those hard runs/days/times though. You live, learn, and run on.