By Heather Iacobacci-Miller July 23, 2012
Running and Enjoying the Weekend

This weekend was super productive. I got in 2 pretty good runs, definitely better than Friday's run. Saturday I set out for 4-5 miles. It was really hot (go figure) so I was trying to be flexible about my miles. If it was just too much, then I'd stop early. There's really no reason why I must get in 5 miles, or any for that matter.

They weren't just easy peasy, but so much better than the previous day. I definitely pushed myself for some pretty good splits. My first mile was 9:10, then I got in 8:53, 8:54 then a holy-crap 8:36. I messed up my lap on mile 5 so I don't know exactly what that one was, but my overall average was 8:53.

Oh, good to know lesson learned - ice pack on the back of your neck after a hot run is amazing. I can't believe I haven't been doing that all summer. It really helped cool me down fairly quickly.

After lots of stretching and rolling out on my Triggerpoint Therapy Kit, I ate breakfast then started tackling some drywall repair in our bedroom.

We needed to paint the room after the new AC installation and vent moving that took place in the spring. Been putting it off because we knew we had to do quite a bit of patchwork. It's always so messy to tear down plaster and drywall then patch, sand, patch, sand.

So, I started on that while Jason got some yard work done. Then I had to wait for it to dry so I got in the pool and my friend came over and joined me. It was such a relaxing afternoon just floating and chatting.

Around 4:30 we went to The Root Cafe's 1-year anniversary celebration. It's about 3 blocks, so we could just walk over. They are committed to serving local foods and do have a variety of vegetarian and vegan options. They went potluck style, which was kind of cool. They did serve BBQ beef and BBQ tofu (the tofu was awesome) then everyone just brought sides and desserts.

I loved seeing all the very fresh, homemade sides. You could definitely tell that most of the items were freshly grown veggies. Very cool.

Sunday I got out for a 3 miler. My plan was to go really slow, kind of a recovery run. I ended up going faster than I had wanted, or had intended, but I was just going with how I felt so sometimes that's ok right? After the run I did do my leg workout that I had been putting off. Here's another lesson learned: don't do a 3-mile run and legs when you're planning to paint. Painting is a whole workout in and of itself.

The majority of the day was spent priming the patchwork, a short bit in the pool and a late lunch then back to painting, painting and more painting. I really thought it'd never end. But, the room is finally done and mostly put back together.

Monday oh Monday
After all the painting, running, lifting, getting out of bed today was a challenge. I was exhausted even after 8 + hours of sleep. At lunch, I did muster up the energy to get in biceps and triceps. Though, I really came close to calling it a rest day.

I wanted something different than the typical workouts I've been doing. I decided to go with Cathe's Power Hour DVD for bis/tris. I haven't used this DVD for anything but legs and abs in maybe 2 years. And while it's definitely an oldie, it's still a really good workout.

My weights have been pretty heavy with lower rep ranges for quite some time. Today was definitely a change of pace and my arms are already feeling it. Rather than 15-25 lb dumbbells, I was using 12's. And in the back of my mind I was semi-skeptical even though I know it's a good workout and just a different style. My shaking muscles will attest to that.

And it's not just doing 16 reps over and over, she actually changes up the rep patterns. So you keep lifting, no resting, no 3 sets of x number of reps. It just keeps going and keeps changing. For example, you might do 16 regular curls then 4 at a 3:1 (3 slow up and 1 count down) pattern then a 2:2 then a 1:3.

So it's constantly changing. I am debating maybe doing one all upper body with this style then 2 separate splits later in the week with the heavy weights, low reps. We'll see....

Dinner was mostly based on what needed to be used up in the fridge. I had some portobellos that I had picked up on manager's special (aka they needed to be used) and some asparagus to use as well. Jason had suggested maybe a mushroom sauce of some sort of Quorn patties with the asparagus and new potatoes on the side.

I thought immediately of something really heavy, winter-ish. He suggested a few options and then I looked around. In the end, I was out of ingredients like kalamata olives and capers for one sauce I wanted to try. So, insert Heather's version of a Mediterranean Portobello and Olive Sauce.

I won't really call this a recipe, mostly because I didn't measure anything, but here's the list of ingredients I used.

Again, let that simmer and reduce before adding in diced cherry tomatoes. Re-season as needed. 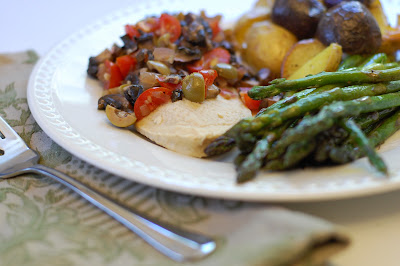 I think the "sauce" turned out rather well. I really didn't know exactly what to expect, so it's always a toss up when you just totally wing it. I think this would actually be really good as a dip with feta or over pasta or quinoa even.