By Heather Iacobacci-Miller August 07, 2012
Itching and Running
So today was kind of interesting. I guess I should back up Saturday morning. I woke up and had 2 itchy bumps on my neck. I told Jason we needed to change the sheets immediately. I thought maybe it was a spider bite.

Later on, a couple of other bumps and then Sunday, a few more. So Monday I spent some time looking up bumps and pictures. Trust me, don't do that. You'll a) gross yourself out and b) scare the crap out of yourself assuming you have some flesh eating disease.

I ended up going to the doctor. I really don't care much for my doctor. He always seems so incredibly blase, unconcerned. He looked at my neck (where the bumps are located) and said, "It looks like chicken pox." He asked if I'd had them as a kid, and yes I did.

He repeated that he thought they looked like chicken pox and asked if I'd been feeling ok. No fever that I knew (though I was having headaches Thursday and Friday). He then said, "Well, if it was me, I'd take an anti-biotic just in case it was staph, but it looks like chicken pox." And that was it. Done. You may go now.

So, I went back to work. I ended up sending a picture to my step-mother (she was a nurse for the state working on CDC cases, or something like that). She called me right away and said she thought it looked like chicken pox and of course was concerned that I had infected other people. Something the doctor clearly wasn't concerned about.

Long story short, or maybe it's too late for that, I worked from home today just in case so as not to infect any co-workers. But all the while unsure what I really had. Talk about frustrating right?

And I know lots of people have suggested that it might be shingles because I have had chicken pox before, but trust me this itches and doesn't hurt like everyone says shingles does. I did talk to my sister and a friend of hers had them really bad as a kid but then a super mild case (similar to what mine is I suppose) as an adult.

Have you had chicken pox? How would you have dealt with your doctor in that situation? I just didn't even know what more to say or ask even.

Since I'm not feeling sick, Jason and I went ahead with our morning run. It was "only" 76 degrees according to the house thermostat, though Jason's watch said 82. I will say that as soon as we started moving, it felt more like 92 because of the humidity.

My Garmin is all kinds of jacked up so I couldn't go back and look at splits. I know they were pretty random because there was an unusual amount of traffic, meaning a lot of stopping and standing and waiting (and a little but of cursing perhaps). I'm not patient.

I feel like we worked pretty hard today. We weren't just poking along, but it's hard to say with all the standing we did end up doing - maybe that's why it was easier to go faster at times, we were resting up. Interval run? I do know that mile 2 was 8:52 and mile 7 was 9:02. I remember seeing a 9:20 but have no idea which mile it was.

Either way, ticked off at my Garmin, but happy with a decent 7 miles.

Leg Lifting
Later in the day I went ahead and tackled legs. I need to probably start doing legs on Sundays. My intention was to do a similar set up as yesterday: 4 sets of 6 reps at a heavy weight, then 3 x 8, then 2x10. I kind of goofed it up from the start because I misread my own notes. But it worked out in the end.

The workout was really short - shorter than I expected. But it actually felt pretty effective, as in I had shaky legs going down the stairs. It was nice to try something different at least.

Easy Peasy Dinner
Since I'm quarantined to the house just in case I do have chicken pox, that meant no grocery store trip. That also means I'm digging into the freezer for dinner. Though, that can make for a much easier meal sometimes right?

Jason had picked up some baby and fingerling potatoes, so I roasted those with some Brussels sprouts (frozen) that I had coated in a simple Strawberry Balsamic Glaze. You simply whisk together sugar-free strawberry preserves, balsamic vinegar, some whole grain mustard, splash of OJ, and a dash of salt and pepper. 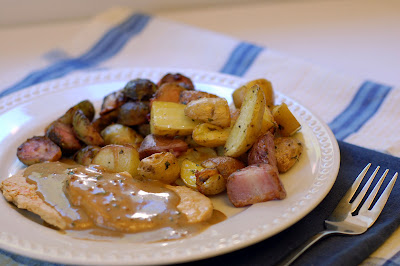 I had some Gardein Chik'n Filets in the freezer. I had gotten them on manager's special and stashed them in the freezer for times just like this.