By Heather Iacobacci-Miller August 28, 2012
Anniversary Dinner
I just wanted to start by thanking everyone for your kind words, comments, and anniversary wishes for our 12-year wedding anniversary yesterday. We hadn't planned on doing anything super special. It's hard to plan that way on a Monday.

We had talked about lunch, but then ended up deciding on a last-minute nice dinner at a restaurant downtown called Lulav. We've gone there many times over the years for anniversary dinners. They have changed up their menu quite a bit, however, and there are some options that I miss, particularly one specific salad.

They do have a fantastic house salad with a lemoncello vinaigrette. Jason ordered their wild mushroom appetizer. He ended up getting a paella for dinner and I went with their only vegetarian option, rotini with squash and wild mushrooms. I did request a red sauce over the creamy butter wine sauce that it was supposed to have come with.

No dessert. We were stuffed. I suppose the wine we had counts as a treat though right?

Humidity's Back
This morning I woke up just after 5 with 7 miles planned. I was expecting slightly cooler temperatures, I guess I've gotten spoiled for 65 degrees recently. I was smacked in the face with 78 degrees and humidity that made you wish you had gills.

I got in about 2.5 miles before meeting up with my running buddy. Then we continued on together giving me 7.5 miles and by the time she made it back to her house, it was a solid 7 for her.

Today was definitely more of a struggle than recent runs have been. My legs started feeling incredibly heavy, the humidity was no joke, and I was dripping with sweat. It was really nice having "A" there to help keep me distracted from the unpleasantness of it all.

Today she was my literal running sherpa and I also knew I had several other virtual sherpas (Jess, Jo, Dorry, Lindsay, Sarena, Kristina) rooting me on as they were out on their morning runs as well.

Tempeh Tuesday
I almost went with Taco Tuesday tonight, but wanted something much lighter after last night's heavier dinner. We went to the store during lunch, and Jason had picked up some really nice looking portobello mushrooms. So I decided to use those for a salad - Portobello and Tempeh Salad with Creamy Roasted Red Bell Pepper Sauce*.

(* For this batch of sauce, I used veganaise and more almond milk in lieu of the silken tofu to make for a much looser sauce and I also added in the bits of cooked down onions and garlic from poaching the tempeh.)

I poached the tempeh in no-sodium vegetable broth, minced red onion, minced garlic, thyme, black pepper, and salt. I like tempeh, but sometimes it can be bland. So I decided to poach it before baking it to try to infuse more flavor and keep it moist. 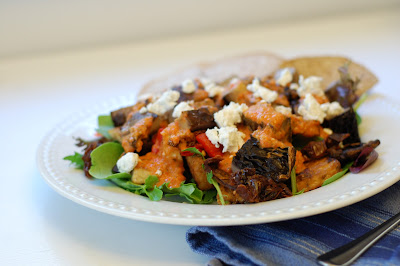 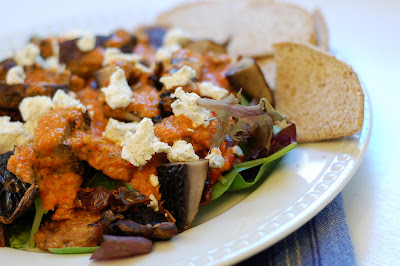 After the tempeh had been poached (basically until most of the liquid cooked down), I roasted the tempeh with the portobellos. I had some jarred roasted red bell peppers and some rehydrated sundried tomatoes that I added to the top along with goat cheese and the Creamy Roasted Red Bell Pepper Sauce.