Well, today one of my bigger running fears happened. I didn't just hit a wall (or 2), but I did it with my new running buddy. It's honestly one of the reasons I've shied away from running with others. It's one thing for me to have a running temper tantrum with Jason or alone, but with someone else...

The deck was really stacked against me, and I knew it too. My legs and feet had already traveled 13.5 miles over a 2-day period. Thursday is typically a rest day so that I can be fresh (mentally and physically) for my long run on Fridays.

However, Hurricane Isaac is about to cause us some headaches with regards to the weather. So, unless I wanted to swim my long run on Friday, I needed to try to go for it today.

So, tired legs (and feet), 26 mph gusting winds (coming from the swirling remnants of the hurricane), and 77 degrees with high humidity all add up to potential disaster. And it didn't help that my first 5 miles were entirely too fast. I think the fact that it was completely dark out, made me just a tad more nervous and I ran just a tad bit faster. In fact, mile 5 was an 8:34. Let's just say I was running out of gas quickly.

I met up with "A" at mile 5 and warned her that I was really out of sorts. I suggested we take the path of least resistance, in other words, as few hills as we could manage. She had actually ended up waking up early and decided to get in 4 before I got to her house at 6:15.

We took off mostly flat, then some down, then some up, then some flat. It wasn't horrible, but I just felt my legs slowing down like I was running through thickening cement. The thick air was making breathing much more labored as well.

All I can say is that I am so glad that "A" kept chatting away because it did help me stay out of my head. Well, I was all up in my head, but her company helped me more than if I had been on my own I think.

But, I was fairly embarrassed to be bonking like that. I know it happens. But I was holding her back of course. I certainly couldn't have been exactly pleasant to be running next to either. But she stuck with me regardless. We hit my house at mile 8.75 for me, and I told her I just couldn't keep going.

She was going to shoot for 10 (totally unplanned). And if I hadn't have been such a mess, then we could have gone a slightly different route making it easier for her to get to 10 by the time she got home. Again, another reason I felt bad.

She continued on and I paced up and down the block to try to cool down. I realized I was at 8.75 miles and I was ticked at myself. So after I was sort of calmed down, I decided to go for it. I made a very slow loop around and ended at 9.5 miles - mostly because I'm stubborn as hell.

What is your biggest running fear? Do you worry about hitting a wall with a running buddy? What do you do when you hit the wall or totally bonk?

Despite the crappy run, I did enjoy having company. I also enjoyed knowing I was on a virtual sherpa run again with Jo who hit double digits today. AND we were running in celebration of Melissa's big 3-0 birthday!

Lazy Dinner
Tonight was a very dreary, rainy evening. I decided to make a "quick" spaghetti sauce. In other words, not the family recipe that ends up taking 5+ hours. I picked up some spaghetti squash and used that in lieu of pasta.

Rather than make my own, I did take the lazy way out for "Meatballs" using LiteLife GimmeLean. Normally I prefer to keep processed foods to a minimum, but sometimes I'm lazy. Today, I was lazy. 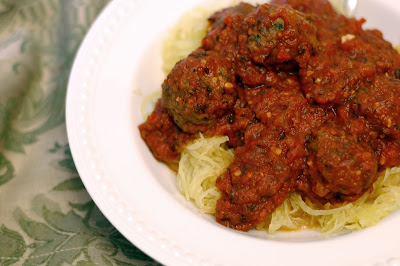 Sometimes, I'm ok with being lazy ;-)