By Heather Iacobacci-Miller August 14, 2012
Run Dates
This morning Jason and I rolled out of bed and got ourselves ready for a run. The plan was to do 2 miles with Jason, then I was meeting a new running partner for another 5 miles for a total of 7 miles.

I won't lie, I was pretty nervous about running with someone new. And "A" is definitely a fast runner, and a seasoned marathoner. But that can be good for me right? It's sort of a long story, but she used to teach some weight circuit classes at my gym that closed.

So we'd seen each other here and there at the gym in passing. Another instructor had mentioned that "A" lived downtown. And I already knew that she ran (overheard a conversation), and I'd see her occasionally running, but we never really talked.

Anyway, Saturday I ended making a stop by her house so we could visit, and we planned the run date for today. She usually just runs the neighborhood solo, so she was excited to have someone to run with, and I think Jason likes the idea of me having another running partner too ;-)

I have only run with a running group twice, and two other people other than Jason or just solo plain and simple. I knew we'd be going faster and I knew we'd be tackling some bridges. So I was nervous. I didn't want to slow her down too much or embarrass myself with a horrid run. I just pictured myself having a meltdown or just struggling the entire way to keep up. But, I didn't.

We definitely ran faster for the majority of the run than I normally would have for a 7-miler (8:43-8:50 min mile), but it was good. It pushed me, which is something I needed. But we were so busy chatting and visiting that I really barely noticed. Time flew by and it was over before I knew it.

It was so tempting to just keep on going just so we could visit longer. And, of course, the weather certainly helped. It was probably about 68 or 69 degrees with a light breeze.

So, morning run dates were a success. Now I just dread the temperatures going back up. We all know they will. This is just a teaser.

Do you get nervous when you workout with someone new for the first time? Do you prefer to run or train with others or are you a solo exerciser?

I sort of oscillate on this one. I do enjoy group spin or step classes, but prefer to lift alone. And running...sometimes all I want/need is to run alone. I love that time to myself to just "be." But at the same time, it's really nice to have a partner. Someone to help you get through rough patches, someone to chitchat with here and there, just someone at your side.

I was planning to do legs at lunch, but my legs were definitely more tired from this harder run. So, I decided to give it a rest. No need in pushing myself for no reason and having a potentially bad weight workout.

Salad Night
It was a 9-hour day at work today. So skipping the extra workout was probably even smarter than I initially realized. I got home and spent a little time stretching and rolling out. Probably should have spent longer, but I was getting hungry and needed to get dinner going.

Being that it was a long day (including the 5:30 am run), it's safe to say I didn't really want to spend much time on dinner. Thankfully we had plenty of veggies and some kale that I could just roast up for a quick salad.

I roasted kale as well as squash, zucchini, and beets. I had some jarred roasted red bell peppers that I cut up to add into the mix as well as some cannellini beans. I took the lazy way out with dressing this time and went with Newman's Own Balsamic Vinaigrette. 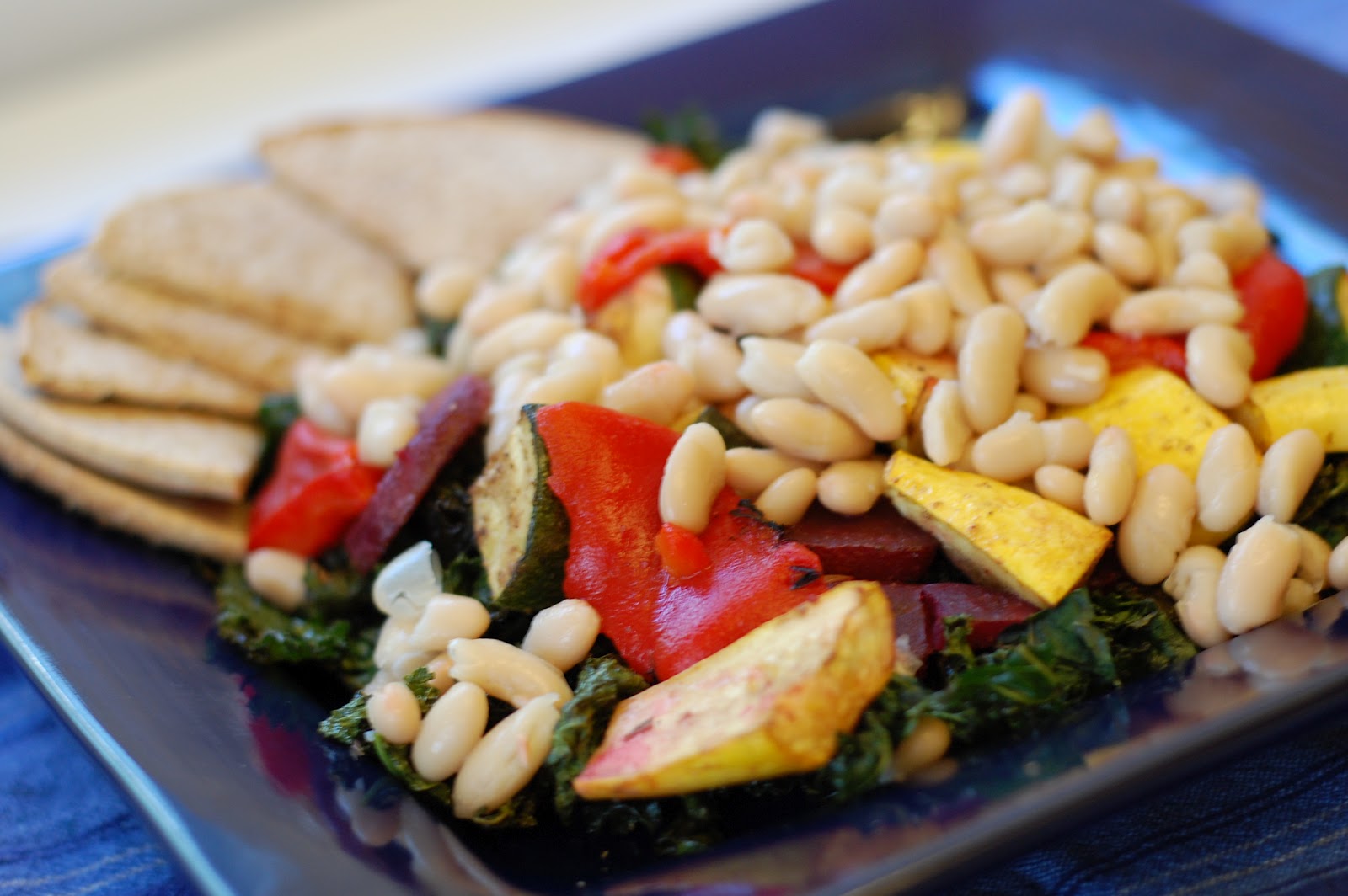 At least it was a super veggie friendly dinner that was easy, healthy, and hearty.