By Heather Iacobacci-Miller August 06, 2012
Running & Lazing
This weekend was pretty low-key for us. Which, was fine by me actually. Saturday morning I got up and hit the pavement for a 6-mile run. It ended up being a pretty good run. Of course, after Friday's horrendous run, anything would seem "good."

It was really hot out, especially because the sun was blazing down on me. So when I got back to the house, I changed into a swimsuit and immediately jumped into the pool. Talk about the most refreshing, wonderful feeling.

I have been a little lax on stretching and rolling, so I did spend some extra time doing that after I got out of the pool. And then I decided to be lazy and get right back in the pool for some pool lounging time. Jason joined me.

We just floated around for a couple of hours before deciding to go out for lunch. We both agreed pizza sounded like it'd hit the spot, so pizza it was. The rest of the evening was pretty low-key. We played cards for a bit while listening to music. Made dinner then sat on the couch. Super exciting sounding huh ;-)

Sunday wasn't much different. I set out for 3 miles, but ended up doing 5 (putting me at 31 miles for the week, holy cow). It was just one of those runs that I didn't want to cut short. I was just out there, by myself, enjoying. I absolutely love it when that happens during a run.

Anyway, I decided to treat myself to another plunge into the pool post-run. Again, heaven. Such a wonderful feeling to jump in the water and have that immediate cooling effect, but also the near-weightless feeling for your arms and legs.

I was a little more productive Sunday at least. I did get laundry done, swept the floors and dusted. Then it was back into the pool for a bit. And then another late lunch just to get out of the house really. The rest of the day was super lazy. And sometimes lazy is just what you need.

How was your weekend? Did you get a chance to be a little bit lazy?

Changing it Up
Today I ended up doing biceps and triceps. I am going to try out a new rep and set number. I've done a workout rotation with a similar set up, but it was done as full body.

So, for the experts, I'd love to hear some thoughts on this set up. I did high reps, low weights for about 2 weeks and while the change was nice, I'm definitely a low rep, high weight gal at heart. So is there a way to sort of combine the two?

Do you prefer one style vs the other? Or do you like to switch it up regularly?

Dinner tonight is yet to be decided. In all the laziness of the weekend, I skipped the grocery store. So it's time to get creative. But rather than leave you sans pictures, I'll share pics of my two crazy furbabies.

They got their hair cut today so they're super spiffy and shiny. Though Maddie doesn't seem to like her picture being taken so her head down was the best I could do. 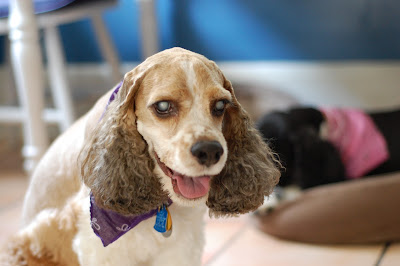