By Heather Iacobacci-Miller August 20, 2012
Rainy Run & Cross-Training
We didn't really have much going on this weekend. No complaints about that really. I woke up Saturday morning ready to run. The weather, however, was not in my favor. It was storming. I kept watching the radar like an obsessed fool trying to figure out when it'd pass.

Finally, around 9:45 the storms were gone and the rain had mostly turned into light sprinkles. I asked Jason if he wanted to go with me. He balked at the idea. Whined that it was raining. But in the end, he headed out with me.

The sprinkles turned into a light rain, but it felt amazing. Very refreshing I must say. My plan was 6 miles and I told him we could loop near the house so he could drop off sooner. He didn't of course. I think the rain added some pep in my step.

I really had to force myself to stop at 6.5 miles. I could have just kept on going to be honest. Of course, Jason was harping on me that he was worried I was running too far the day after my 10-miler. This is from the same person who stopped at 6.5, got water and GU and then took off for another 6 miles.

He didn't run the full long run on Friday because he had planned on a triathlon on Sunday. The weather forecast was calling for storms, so he ended up just decided not to do the race. So, after 6.5 good miles, he suddenly decided to go back and finish out 10, but just sort of kept on going...

My sister ended up coming up for a visit. We did some shopping then had lunch at Pizza Cafe on the patio. She decided to go back home, unfortunately. We did end up heading over to our friend's house to chill on their patio for a while. Very relaxing way to spend the day of course.

Yesterday I decided to cross train rather than run. I really wanted to run (and the storms predicted did not happen, it was gorgeous), but my plantar fasciitis is starting to kick back in. So, as reluctant as I was to do something else, I went ahead and did back and legs and some kickboxing. It ended up being a better workout than expected considering I didn't want to do it to start with.

The weather was wonderful, so I sat out on the patio and read for a few hours while Jason went to the movies with a friend. Then we decided to have a late lunch on Dugan's patio before gluing our butts to the couch the rest of the evening.

We ended up watching the Hunger Games. It was so hard to watch it and not pick it apart after reading the book of course. But, we both thought it was a good movie. And, for those who think I never take the easy way out for dinner...we had popcorn!

Monday Weights & Unplanned Run
I'm still liking the most recent weight set up I've been doing. So, I stuck with it again. There are some days when I'm not completely sure it's effective, but then others when I definitely feel it. I thought I should give it another week or so before discounting it.

I went with a similar set up as I've been doing for biceps and triceps. I did, however, switch up the exercises just a bit. So instead of lying extensions, I moved the kickbacks to that set and went to weighted dips for the 3rd set. I subbed preacher curls for regular dumbbell curls.

It really felt like a good workout today. I think just changing a few exercises can shake it up again.

By the time I left work, I had the running bug creeping up on me. I had no plans to run today. But the temps were about 85 degrees, it was cloudy, and the humidity was only 39%. But I didn't really need to run. I'm a planner, and this wasn't on the radar.

But I found myself walking in the door and going straight to my running gear. It wasn't exactly cool out by any means, but it wasn't 100 degrees either. So I just went with it. I did an unplanned 3 mile run.

I went the easiest, least hilly route I could think of. I just ran by feel, not paying attention to my speed. It was just a perfectly freeing kind of run. It was just what I truly needed today. 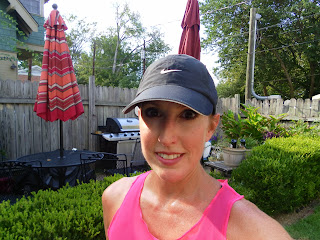 So while I normally am a major planner when it comes to my workouts (even planning in options), sometimes you have to go with your gut. Are you a planner or do you wing it?
Grilling Weather
Since the weather is so much more pleasant (90 degrees with lower humidity), grilling sounded like a good option. It's much more enjoyable to grill out when it's not 100+ degrees. And it means enjoying the patio and just relaxing, but not in front of a tv or cooped up inside.

It's Monday and I didn't want complicated or time-consuming. I have a tendency to let my cooking get out of control sometimes. But this was easy and fast.

I grilled up zucchini, squash, bell peppers, and baby potatoes that I had marinated in a balsamic vinaigrette. I served it all over some quinoa (pulled out from the freezer) with my Creamy Roasted Red Bell Pepper sauce on top. 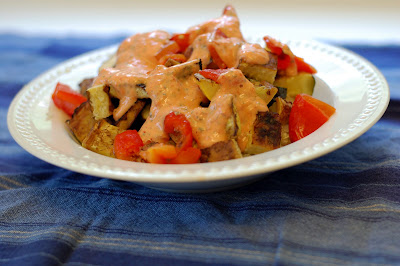 Super simple. But very satisfying. Perfect for a Monday night meal if you ask me.