By Heather Iacobacci-Miller August 29, 2012
Speed Work
I sure wish I could brag about some awesome speed work this morning. I guess I can brag that I actually did 5 x 800's and didn't die. That's brag-worthy right ;-)

The temperatures were probably 10+ degrees warmer than last Wednesday and the air was just strange. It was humid, but not extreme. But still dampish or restricting feeling. Not sure how to even describe it.

There was a fairly heavy, or maybe I should say steady, wind as well. And it was odd, because I'm a major sweater (and so is "A"), but neither of us was sweating like it seemed we should. Maybe that wind dried us off faster than we realized.

Anyway, things just felt off. "A" even said she wasn't exactly feeling it. I was definitely a lot slower than last week. It felt so much harder - kind of like yesterday did.

But my splits were at least very consistent even up to the 5th one. I managed to maintain somewhere between a 3:48-3:50 pace for each 1/2 mile interval (roughly a 7:40 min mile if sustained that long).

So, I ended up with 6 miles in all and was very thankful to have some good company again to get me through. It's amazing how much chatting we still manage to cram in between intervals.

New Recipe
I've been feeling a little less than enthusiastic about cooking recently. I know it's just overall fatigue. Work is pretty hectic, and the early morning runs start to catch up with me. So Hump Day ends up being more like Humph day.

I thought I might end up making stir fry tonight, frozen veggie style even. But then I saw the most amazing looking and sounding recipe for Fajita Burgers from Carrian at Sweet Basil.

We love fajitas at our house. I usually make them with either tempeh or seitan. So I decided to see if I could come up with a vegan Fajita Tempeh Burger. I've never used tempeh for burgers, but figured it would be similar to TVP, which I used to use when I first started making my own veggie burgers.

I decided to try poaching grated tempeh to infuse it with as much flavor and moisture as possible, then use beans and chia eggs as binders.

In a large skillet, saute onions and garlic for a couple of minutes then add in the tempeh, broth, and seasonings.

Allow to simmer on low until liquid cooks out.

Place the tempeh with any onions and garlic from the pan into a food processor along with the remaining ingredients up to the chia egg. Pulse until mostly smooth but still has some texture.

Transfer to a large mixing bowl and add in the seasonings, chia egg, and flour. Mix thoroughly until the mixture becomes stiff enough to shape into patties, adding additional flour as needed.

Form into patties and place on a prepared baking sheet. Bake for 20 minutes then flip and bake an additional 20 minutes or until cooked through.

Meanwhile, saute the onions, peppers, and garlic in a large non-stick skillet with seasonings. 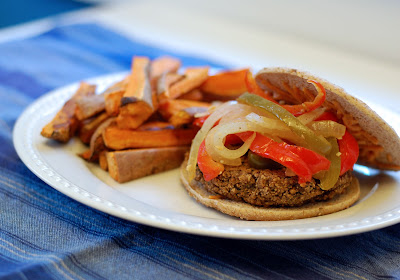 So while I initially didn't feel up to cooking, saw it as a major task, I decided to follow some wise advice. Lisa from Thrive Style had an awesome post recently Enjoying Doing the Dishes.

Basically, it's some sage advice to stop rushing, to take the time and enjoy the moments even the chores. They become less like "chores" when you take time to savor the moment.

Do you remember to enjoy doing the dishes or do you often just see the day-to-day tasks of life as chores?