If you follow Lindsay at Cotter Crunch, then you've likely heard her mention being a sherpa for her triathlete husband. After reading her initial post on being a sherpa, it changed my idea of what a sherpa was or could be. Technically a sherpa is:

Both meanings imply assistance right? And assistance can come in so many forms and fashions - from literally carrying "thing" for someone or just being there for support. And when you're running or training for a race, you need all the support you can get. And this of course extends into friendships and relationships - surrounding ourselves with positive people.

My friend Jessica at EatDrinkBreatheSweat and her hubby are training for their first full marathon. And over the course of the training, I've mentioned that I'd be running with her virtually. Her sister has also been doing some training miles for support. And Lindsay has been providing Healthy Bites to fuel their run. So we're acting as sherpas. Jess wrote about it after their 16 mile run.

While we aren't noted mountaineers assisting climbers on expeditions nor are officials as siting a government representative, we are runners providing support (either virtually or in real life) to other runners.

So where am I going with all this rambling about sherpas? Last night I posted on Facebook, just a little message to let Jess and Scott know I was with them in the morning for their huge PDR - 20-mile run. And it snowballed into something so special and spectacular. Absolute, pure support, love, friendship. 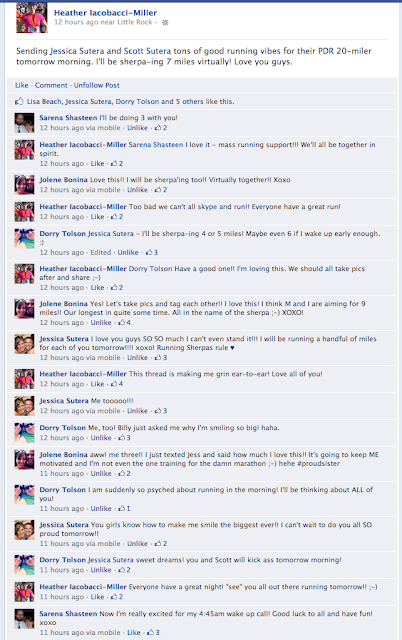 I might not be running next to Jess (or Jolene, Dorry, or Sarena), but I'm running in spirit. She knows I'm thinking about her along the way. And sometimes, that little bit of support can go a long long way mentally. And as runners, shouldn't we unite and be supportive? We're all out there pounding the pavement. And so often we're out there at the same time even.

How cool is it to think about your friends running as well? To be curious about their weather, their sunrise, the interesting things they might see, or the funny things they think about. Silly sounding? Perhaps, but it makes me smile.

This morning I was able to run with a running buddy AND run virtually with some amazing friends. It all made me less whiney about an early-morning wakeup call. I knew they were all out there too. So when my alarm went off just after 5, I rolled out of bed and started getting ready.

The plan was that the first 2 miles or so would be solo (except for my virtual running buddies) then I would meet up with "A" to finish another 5 miles. The air felt amazing for a change. It was about 65 degrees and the humidity didn't seem out of control.

It was very very dark though. There were a few times when I had to slow down to try to see where I was stepping even though I know the route like the back of my hand. But dark is dark. So my first mile was about a 9:18 then mile 2 was 8:56 (a better lit stretch).

I didn't check my watch every lap, but there was an 8:43 somewhere along the way. I tried not to panic when I saw 8:16 at one point (not the lap pace, but just a current pace). I can talk myself out of a pace if I want to.

I felt like I was struggling to breathe today, more labored than it should have been, despite the weather. I did see that there was/is an air quality alert though. So maybe that was the problem. I very rarely feel like I could use my inhaler during a run, but today I think it would have helped.

But, overall, it was a good run. I didn't feel like I was going to just die on my running partner. I know I slowed her down though, so that helped push me a bit more. Not a bad thing. I ended up with an overall average of an 8:56 pace for 7.3 miles.

And if you want to know how Jess' run turned out - check out her post and check out Jolene's take on Sherpa-ing.

Do you surround yourself with sherpas?