By Heather Iacobacci-Miller September 11, 2012
Cool Weather = Increased Speed
It was so tough dragging myself out of bed this morning for my run. I didn't sleep very well for starters. And it's just flat out dark at 5 am. I did end up resetting the alarm to give me an extra 10 minutes in bed, just laying there, but still.

Jason set out with me for the first 2 miles, then I met my running buddy for the remaining 5.5 miles. It felt fairly chilly out - 60 degrees. Of course, I was sweating like usual by mile 2. The weather felt great though. Not too windy, but just enough of a breeze to keep you cooled off.

My legs were much peppier than I expected too. In fact, my slowest mile was the first one at 9:10. That one is usually the "wake-up" mile for us. It does make a difference when you don't feel like you're breathing under water - in jacuzzi temp water nonetheless.

"A" and I kept up a really good pace. I fought my initial urge to slow down and just went with it. I knew she'd slow if I needed her too. And honestly, I really didn't. But there was certainly that initial urge and fear that I was going to end up having a crappy run again.

But, I was able to participate in the conversation today unlike the last longish run where I semi-bonked on her. In other words, I wasn't struggling just to keep running let alone talk.

My fastest mile was 8:30. We did have a slow one at mile 6 because of a ramp that zigzags up to a bridge so you really can't go fast, but it's better than taking the stairs to the top. My overall average for 7.53 miles ended up being an 8:47. I'll take that for sure; it left me grinning to be honest. Now if I can shave a few seconds off and maintain for 13.1, I'll have a half PR in October.

KISS Dinner
My legs were pretty heavy feeling after the morning run. A sign I was definitely working harder. But not a bad thing of course. I decided to indulge myself with an Epsom salt bath before rolling and stretching and before tackling dinner. This really should be more common and not an indulgence.

Dinner almost ended up being a lot more complicated than I had really intended. I started off just trying to figure out how to use the last of our Japanese eggplants from the garden. I also had some zucchini to use up.

I thought that some sort of casserole would be an easy option since it was cool enough to use the oven. My thoughts were going towards something with a quick, homemade red sauce and veggies. But then Jason asked if I was going to be crisping up the eggplant with panko. Well, I hadn't planned on that....And it's awfully tasty.

And I almost went that direction. Then I stopped myself. I needed to make something simpler rather than more complicated- KISS (keep it simple stupid).

In a non-stick skillet, dry sear your tofu gently pressing to release the moisture. Remove and allow to cool then cut into cubes.

Combine veggies, tofu and seasonings in a large bowl and toss. Add the spaghetti sauce all and put into into a casserole dish. Cover with a lid and allow to bake for approximately 25-30 minutes. Remove lid, sprinkle the top with your cheese and bake until cheese is melted.

*If you want it extra cheesy, you can add in some of the Daiya to the mixture, saving more for topping the dish. 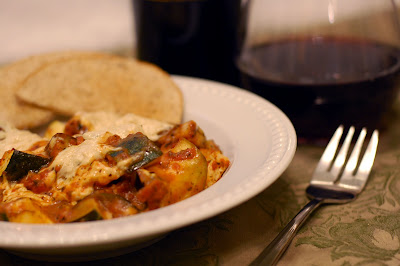 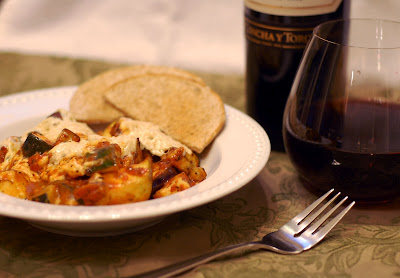 Now, if I had remembered to start the sauce sooner, this would have gone much smoother. I was busy trying to relax though ;-)