By Heather Iacobacci-Miller September 05, 2012
Morning Run
This morning the alarm seemed to go off far far too early. The seasons are changing and it's dark until about 6:15-6:20 when the light is just starting to show itself. You know, that period when the sun isn't exactly up, but the stars aren't out. The streetlights are just starting to shut off. So, that means that I didn't see light until about mile 5 of my 6 mile run. That's a lot of running in the dark.

Thankfully, my streets are mostly well lit. I love my blinking light. Kind of wish I had 2. And of course there's the mace. So, armed and ready to go, I "picked up" my running buddy around mile 2 and we took off to get in a few miles together.

The air was simply oppressive. That's really all you can say. It was so warm and humid that we actually weren't sweating buckets. I mean, we were soaked, don't get me wrong. But it wasn't streaming down our faces. Too hot to sweat? Perhaps.

I enjoyed the run, mostly because I had a great running partner. I did feel like I was struggling though with my breathing. That always makes things seem harder than they should be. We still managed a decent pace, sub 9 overall (though I know it was slower for "A"). All things considered, no complaints.

I did need to stop and stretch out my foot/calf around mile 5, but for the most part, it felt pretty good. I did use my KT Tape and used the recommended method for taping for Achilles pain. It really seemed to help relieve the ache. So then it was just the plantar fasciitis to contend with.

I plan on taping up again. Usually the KT Tape lasts several days. But I guess it just can't stick with this heat. A little disappointing though because it's not exactly cheap. However, I must say that there customer service is really fantastic. I ended up emailing them about it. Very responsive!

Fajita Burgers
"A" dropped me off at my house at my mile 6 and continued on to finish out her run. I grabbed my bathing suit and took a quick dip in the pool to try to cool down. Of course, the water was almost like bath water, but it was refreshing at least. And it feels really good to stretch in the water by the way.

Jason had an appointment after work, and I wasn't exactly sure when he'd be home. This meant something quick and simple was ideal. I did have to turn on the oven, but I just left the kitchen while the oven was on.

I had some Fajita Tempeh Burgers leftover, so I just decided to thaw those out. Just as last time, I simply sauteed onions, bell peppers, garlic and Tex-Mex style seasonings to go on top. An of course we had to have baked sweet potato fries. 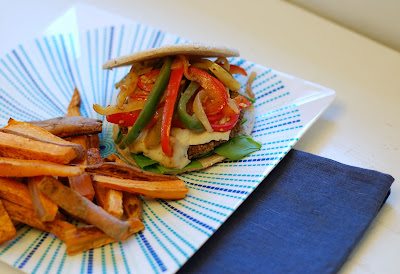 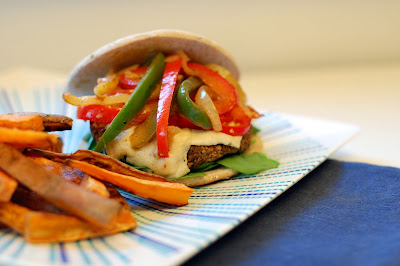 This time I used the Daiya Jalapeno Garlic Havarti Style Wedges. If you like jalapeños  you'll love this. And it melts up so nice and ooey gooey.