By Heather Iacobacci-Miller September 21, 2012
Running & Lifting
Yesterday started off with a dark, but really great 4.5 mile run with my running buddy. I was afraid my legs were going to be heavy from the runs Tuesday and Wednesday, but they felt great. We just chatted away and boogied on down the road.

I didn't pay any attention to pace until I stopped my Garmin while stretching and was really surprised to see an average of 8:43. And the best part was that I never felt like I was struggling. It was just a great run with fun conversation (which I actually missed this morning since it's a rest day).

Don't you just love it when running is almost easy like that? I mean, you're working, but everything is just sort of clicking into place nicely. Now if we could figure out how to make all runs like that...

During lunch I did managed to get in shoulders, back, chest and some more legs. I feel like I've been neglecting legs since I don't have access to a squat rack to lift heavy. So perhaps working them twice a week will have to suffice. I tried to work more glutes yesterday.

Protein Soup Please
Without going into details, I didn't post yesterday because they had admitted my nephew into Children's Hospital. Just when I was about to head over there to take them some clothes and toiletries, my sister said they were going to release him and let him go home for the night. Great news of course.

It was cool enough in the evening that soup sounded like a good idea. Plus, I had a kabocha squash sitting on the counter that has been staring me down all week. I went with a Curried Kabocha and Pumpkin Soup.

You'll notice that I added silken tofu and white beans to the soup. I know that protein isn't always a big concern for everyone, but the way that I lift weights and run (workout in general) I feel that I really do need more protein. I can definitely feel the difference when I'm not getting in enough during the day. So, it's easily left out, but I would think the soup would be far less filling without some protein.

Directions:
In a large soup pot, saute the onions and garlic until begin to soften. Add in the cubed, roasted kabocha, beans, tofu, spices, coconut milk and about half of the broth. Allow to simmer for approximately 10-15 minutes

Add in the pumpkin and remaining broth. Re-season if needed and allow to simmer for approximately 20 minutes.

I knew I wanted some sort of bread to go along with the soup. And there was one recipe I've been wanting to try. So this was the perfect opportunity.

I decided to make my friend Sarena's Rosemary Chickpea Oat Flatbread. I've made a few of Sarena's gluten-free baked goods before and she's never let me down. Seriously waiting for her to open up a gluten-free bakery any day now.

The only changes I ended up making were using parsley and kalamata olives as I was out of rosemary. Guess I should have checked that before getting everything else mixed in huh? 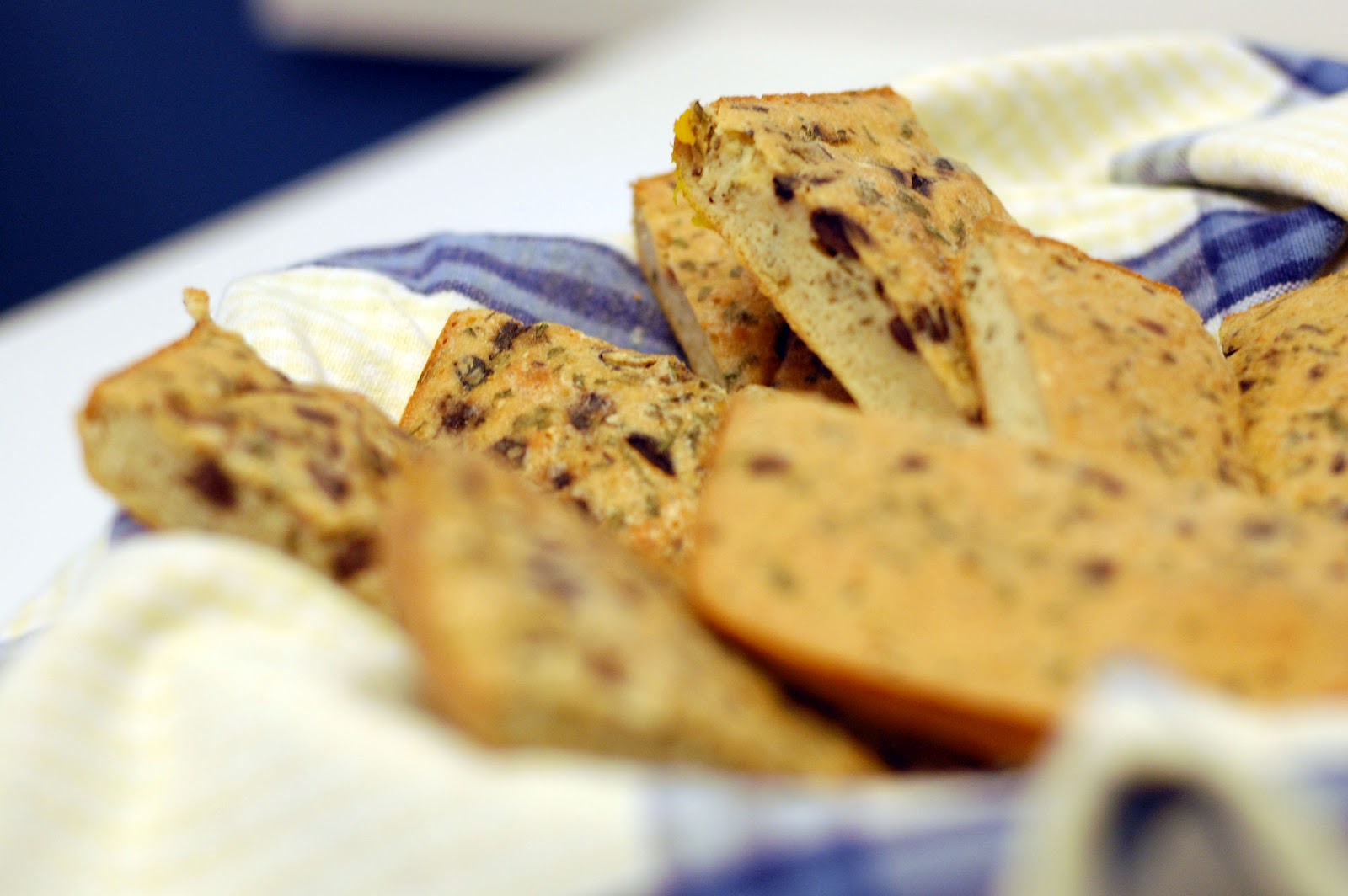 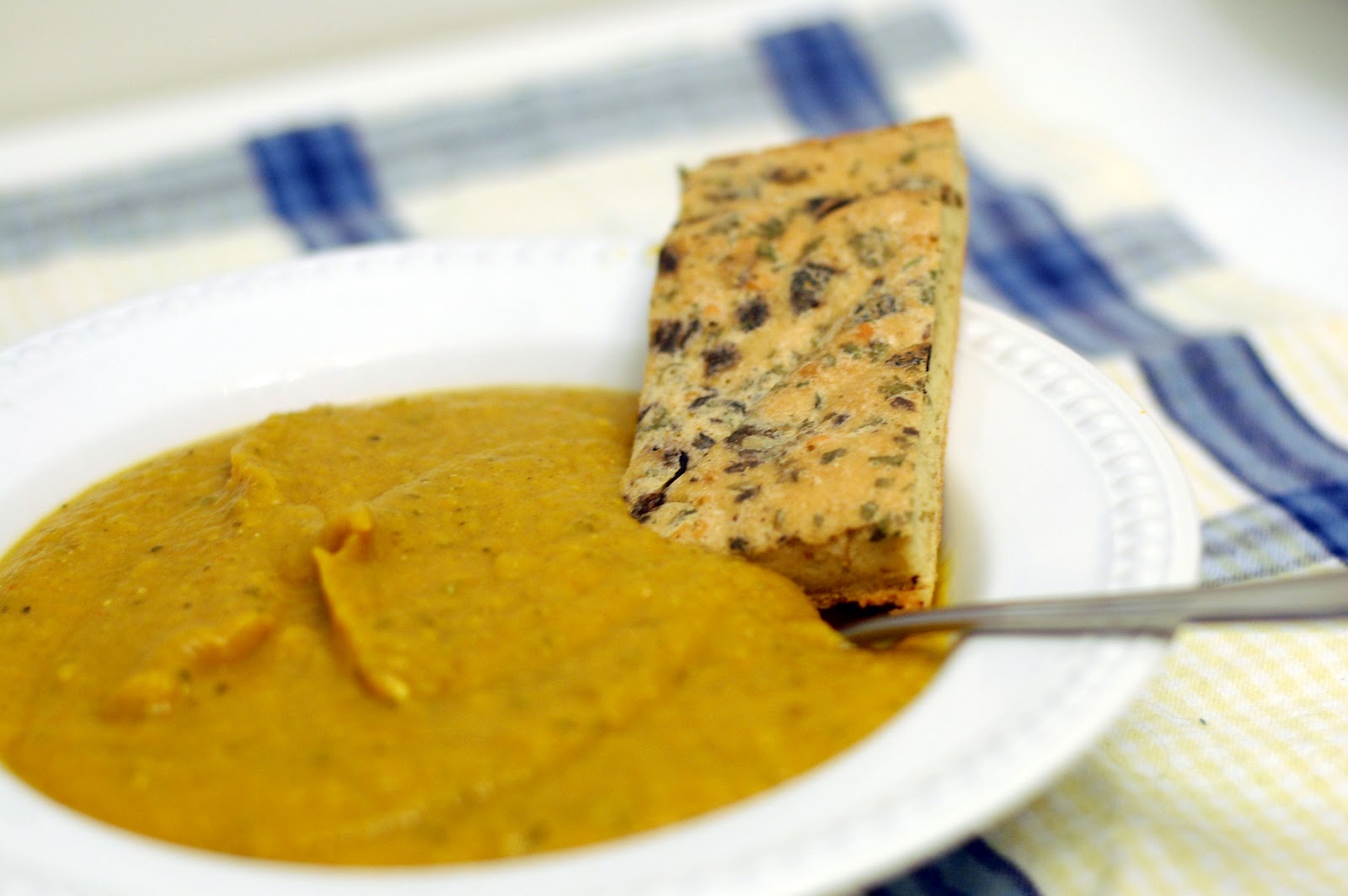 All I can say is that you must try this flatbread. It's amazing. Jason kept saying over and over how great it was. I had doubled the recipe amount and we only had one small slice leftover if that tells you anything. The best part is that it's really easy to put together. So you gotta try it!

Fun Facts Friday - Running Conversations
I was thinking about some of the conversations my running buddy and I end up having during our runs. Sometimes they're really random, sometimes they sort of flit around, sometimes we get more in depth. But the topics can vary wildly.

I think some of that comes from talking, listening, also concentrating then one thing leads to another thought and it just sort of tumbles around. So here are some of the things we chat about (because I know you are at the edge of your seat with anticipation right?)

And of course there are so many other random topics here and there, especially those first few runs together where we were really just introducing ourselves to each other.

Your turn - what are some of your conversations? Maybe even those convos in your head. Those can be really interesting!