By Heather Iacobacci-Miller September 10, 2012
Running & Tailgating
We had some incredible weather this weekend. The lows were in the low 60's and highs mid-80's. It actually felt like fall. And I guess that came just in time for the first of two AR Razorback games held in Little Rock. The university is in Fayetteville, but two games of the season are in Little Rock. 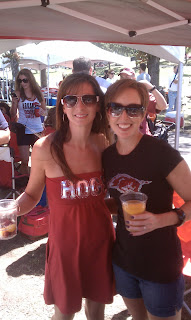 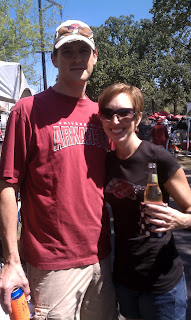 And, it's a huge deal. Everyone turns out for some serious tailgating. It's just one enormous party on the public golf course outside of the stadium. We, of course, went. We met up with our friends. Walked around and visited with other friends.

Lots of standing, walking, walking and standing. Let's just say that didn't bode well for my feet after our morning run. Because it was cooler, we actually got to sleep in until after 7 and didn't have to start the run until around 8:30. It was a nice change of pace, being able to actually wake up fully before taking off out the door.

Jason and I decided to try out a slightly different (much hillier) route. I guess that was appropriate after my Hills post on Friday. Unfortunately, he wasn't having a great run. His sinuses were all messed up, heart rate too high. Just crappy. I, however, was having a great run.

I don't know if it's better or worse to have a good one while your partner is suffering. I felt terrible of course. But, he's stubborn like me and finished 7 miles - and we actually kept a decent pace despite the struggle.

I dropped him off at the house at mile 7 where I got more water and took my GU. Then I was off again for another 4 miles. It was one of those "everything clicking" types of runs for me. I really had to stop myself from going for 12 miles. I knew I needed to reel it in and not push my luck with my foot. It was getting achy. So, I stopped at 11 miles with a 9:03 overall average. Well hello cool weather running!

After the run, I put my feet up in the air (butt up against a door and feet propped up). This usually helps me with any post-run swelling. I usually try to stay in that position for about 10 minutes. Then I finish fully stretching out.

We got cleaned up and headed to the tailgating events. But by the time I got home, my feet looked like sausages. Jason had actually pointed out how nicely they were swelling up while we were still tailgating and made me sit to prop my feet up. Good thing I had on flip flops because I don't think my feet could have fit into real shoes. 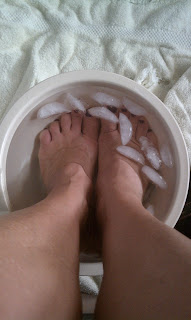 I ended up sucking it up and doing an ice bath for my feet. Holy crap that hurt! But it was definitely necessary.

Sunday was pretty low-key. I got in a really good 5-mile run then spent a few hours on the patio reading. We ended up going out for a late lunch - pizza at a great place that has a nice patio space. Overall, just a really nice weekend.

Cross-Training
Today was kind of a typical Monday. I wasn't ready for it. Just wanted one more day to simply enjoy. The weather was great once again. That of course gave me the itch to get out and run at lunch. But, I needed to rest my legs and feet. So it was cross-training for me.

I got in biceps and triceps then Cathe's MMA Kickboxing during lunch. After work, lots of stretching and rolling out on my Triggerpoint Therapy Kit.

Moroccan Monday
I really wasn't sure what to make for dinner. Jason had tossed out a few ideas. He thought he was going to get home late, so I thought I had plenty of time to figure it out. He ended up home a lot earlier than expected, so we started the whole "what do you feel like eating" conversation.

At one point he mention "that Moroccan" dish. Um, huh? The one good thing about keeping a blog is having access to recipes and dinners.

So tonight I made a Moroccan Chickpeas and Quinoa based off of a few previous recipes for crockpot stews.


Directions:
In a large soup pot, saute potato, oinions, peppers, carrots and garlic until the veggies begin to soften.

Add in the broth, chickpeas, and seasonings. Allow to simmer until the veggies start to become tender then add in the raisins and cook until they have re-hydrated. 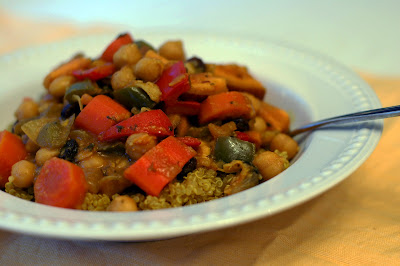 Cook your quinoa according to the package directions seasoning to your liking and serve the chickpeas and veggies over the quinoa.