By Heather Iacobacci-Miller September 04, 2012
Long Weekend
I hope everyone enjoyed a nice long holiday weekend. I decided to take a break from blogging over the 3-day weekend too. Kind of a nice break. Definitely means spending more time just enjoying right?

We didn't have any major plans, no parties or cookouts. That was a-ok with me actually. I just wanted to relax, enjoy, and relax some more. I did get lots of laundry done and a few chores, but other than that...pretty darn lazy.

I got in some pretty good runs despite the insane heat. We're getting August heat in September. So indexes are reaching the 100's again and the humidity? Let's just say gills would be nice.

Saturday I stuck to a short run, 3.5 miles then got in a really good weight session for shoulders, back, chest. My chest is still sore. Jason and I ran a lot of errands Saturday then had a late lunch out. The skies weren't exactly clear, so no pool time.

Sunday I got in 7 miles, part of it with my running buddy. We had such a fun run too. We just sort of meandered through the neighborhood going down streets we might not go down alone. It was so hot out, so the periodic stops to check out a house or admire a nicely manicure yard was very much welcome. In fact, we did make a stop by my house where I grabbed some towels (half of which I ran under cold water) so we could cool ourselves down and dry off.

The sun was out in full forces, so I enjoyed some time in the pool. I guess the one good thing about the high temps is that the pool is still very much open and very inviting I must add.

In fact, the mere thought of jumping into the pool is what got me through my last mile of another 7-miler on Monday. It was already in the mid-80's by 7:30 and the sun being out certainly didn't help. I tried to keep on streets that were as shady as I could find. But by that last mile, I felt like I was simply melting into the pavement. Before stretching or even getting more water, I changed into my bikini and jumped straight into the pool. Simply bliss.

Jason joined me in the pool for some lounging and relaxing before we decided to head out for a late lunch. Most of our usual haunts were closed for the day. But we did find one pizza joint that we like that was open. The only reason we don't visit it more often is that it's clear on the other side of town from us. But, it was worth it.

So, in a nutshell: running, relaxing, lounging, eating.

Plan B
Today I had to go with a Plan B workout. My plantar fasciitis is rearing its ugly head again. It's definitely not as bad as it had been before, but it's not good. And to make things even more fun, now my Achilles is starting to bother me on the same foot.

I spent a lot of time yesterday on my Triggerpoint Therapy Kit trying to hit the triggers to help release some of the tension throughout my calf and foot. Oddly, my calf doesn't even feel tight. But when I hit that sweet spot - yowzers.

As much as I hated to back out of my planned rundate this morning with my friend, I had to listen to my body. Instead of running, I went for a low-impact Cathe MMA Kickboxing DVD along with weights for biceps and triceps. Definitely not the workout I had wanted to do, but it was the one I needed to do.

Do you have recurring injuries or do you tend to get different injuries? Clearly I was never over the plantar fasciitis entirely. And I often wonder if I ever will be. I feel like it might always be a battle I have to face as long as I run.

Deconstructed Taco Salad Bowl
I've really not been terribly inspired as far as cooking is concerned. Not sure if it's the heat, just being lazy, or what. And the thing is, I used to really love cooking up something new and unique. But lately I've just wanted to take the easier way out and go with more tried and true dishes.

Of course, that's not to say that the tried and true dishes aren't tasty. And often they're faster. So double bonus right? Tonight I took the easy way going with the Taco Tuesday theme. Themed nights definitely take the guesswork out of coming up with a meal.

I had thought about the taco salad bowls, but decided to not turn on the oven - we had a lovely heat index of 105 today, definitely not conducive to turning on an oven no matter how much I may have wanted those fun bowls. I do, however, have a toaster oven. So I just toasted up the tortillas in the toaster oven. Besides, the first thing you do with the bowl is to break it right? The breaking is already taken care of this way ;-)

I topped lettuce and spinach with a mixture of black beans, onions, bell peppers, tempeh, and corn. I seasoned it all up with the usual Tex-Mex spices like cumin, chili powder, red pepper. 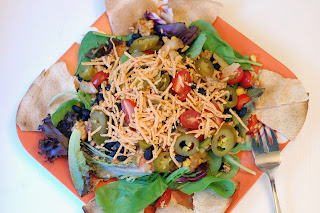 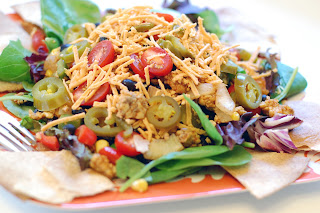 As usual, I topped with lots of jalapenos and Daiya Vegan Cheese and some diced cherry tomatoes.