By Heather Iacobacci-Miller October 15, 2012
Slower Long Run Saturday
Saturday morning I made it a point to sleep in. I made it to about 8 am. That's huge for me. It was incredibly foggy out, but not exactly cool. I had hoped to get going for the long run by 9:30 at the very latest. The plan was to drive down to the river trails for this run. We hadn't run near the river since May.

Jason (oh and I love him dearly) is not so quick to get going. Ever. So we didn't end up getting started on the run until close to 10:30. That wouldn't have been an issue had it not been getting hotter and hotter....oh and humid as hell.

It was about 65 degrees and heavy fog when we got started. But the humidity was literally 100%. Hello sweat factor. The plan was to make this long run a true, slow, training run. My half marathon plans always call for 10+ milers at like 9:30 or slower. I've been doing mine at more like 8:50. So the plan was 9:20. Period. Done.

Let me just say that was harder than it sounds. And crazy because we were going slower and a much flatter route. Should have felt easy peasy. But somehow, it was harder. By mile 8 I was starting to hit my mental wall again. I realized I wasn't going to get the 12 miles I was hoping for. But I did manage to get in 11.

Frustrated again. But I got it done and I did stick to the slower pace. I will say it definitely made a difference for my piriformis and plantar fasciitis issues. Mentally though? Still not good. And of course this continues to freak me out for me next half in two (eek) weeks.

After the run we got cleaned up (stretched first) then headed to a running store. Jason wear's Newton's and only one store carries them here. And they were crazy busy. I meandered around a home decor store while he went to check out new shoes. In the end, it was too busy, he was getting too hungry (as was I) so we left quickly and made an emergency lunch stop at Pizza Cafe to enjoy their patio.

Seriously, beer is the best post-long run recovery ever. I had my NUUN, my GU, my bananas, all the good stuff. Still ended up having that crashing feeling until I had some beer. I think it has to be the sugars and carbs in beer. I always want Blue Moon, but Pizza Cafe doesn't have that. So I went with Amberbock. And it works just the same as my coveted Blue Moon. I'm sure I sound like a lush. LOL.

After the perfect recovery meal, we ended up spending the rest of the evening on the couch. Jason was watching the Razorbacks vs Kentucky, but there were rain delays and such. I ended up giving up and going to bed around 9:30.

Sunday Fun(girls')day
Sunday I got up and headed out for an easy run. My plan was honestly 3-4 miles. I ended up with 5 really great miles. I should have stopped sooner, but I could have gone farther too. It was just one of those runs where everything was clicking.

I was just enjoying being outside, alone, not stressing or worrying. Just running. Simply. Running. I honestly had to stop myself at 5 miles because I could have just kept on going. I did get in some leg weights too. Very ambitious for a Sunday.

It ended up being a girls' kind of day after the run. My bestie and I went to the mall to check out New York and Company. They had buy 1 get 1 75% off plus you could use the weekly coupon on top of that.

Then we drove out to the west side of town. I had some shoes to exchange at DSW. We also hit up a huge accessory store before stopping for lunch at a yummy restaurant called Ya Ya's. It was perfect patio weather again. So we just sat outside, had a very leisurely lunch with some wine. It ended up being a fairly long lunch, partially because of the very slow waiter but at least he gave us very large wine pours ;-) to compensate for things like forgetting to bring our hummus (twice).

Monday
I had planned on doing weights at lunch. But Jason and I ended up heading out for a 3-mile run. It was sunny and warm. But it wasn't terribly humid at least. I wasn't sure how my legs were going to react after a weekend of running and weight lifting.

But, I guess it's what they needed. We managed to knock out 3 miles with an overall 8:31 pace. The last mile was actually an 8:21 which surprised the heck out of me considering it was the return home which always means uphill to some degree or another.

I was tempted to just put my weight workout off until tomorrow. But went ahead and knocked it out. I knew it wouldn't take terribly long and I'd be glad I did it once I got going. It was a simple, basic I should say, set up for shoulders, biceps, triceps. I went with trisets of 3x8.

My arms were trembling by the end of this one. I did spend some time on my Triggerpoint Therapy Kit and stretching - trying to make amends with my legs.

Dinner tonight is still being decided. But, I'll leave you with some cool butterfly pictures Jason took on Saturday. They were just congregating. 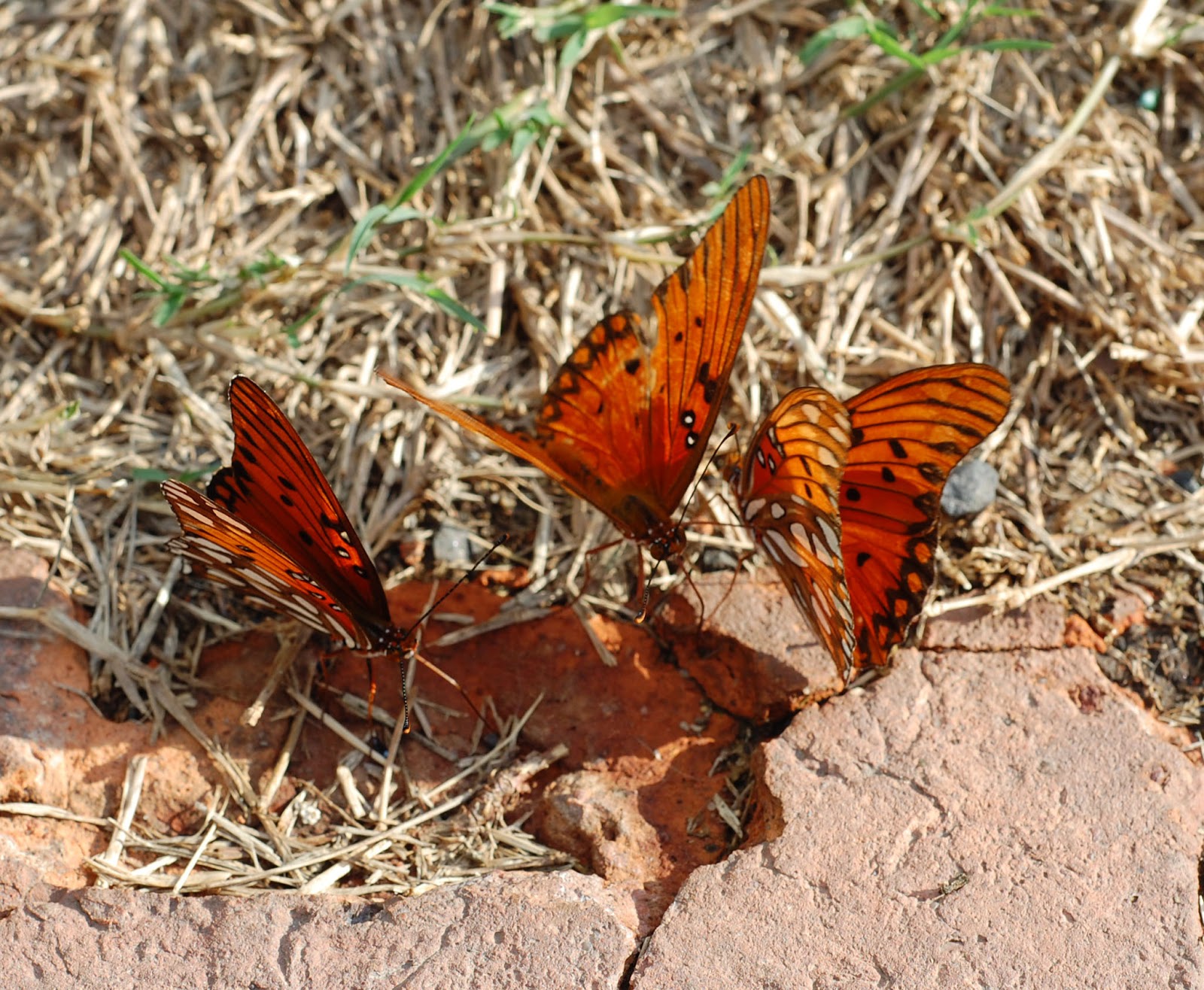 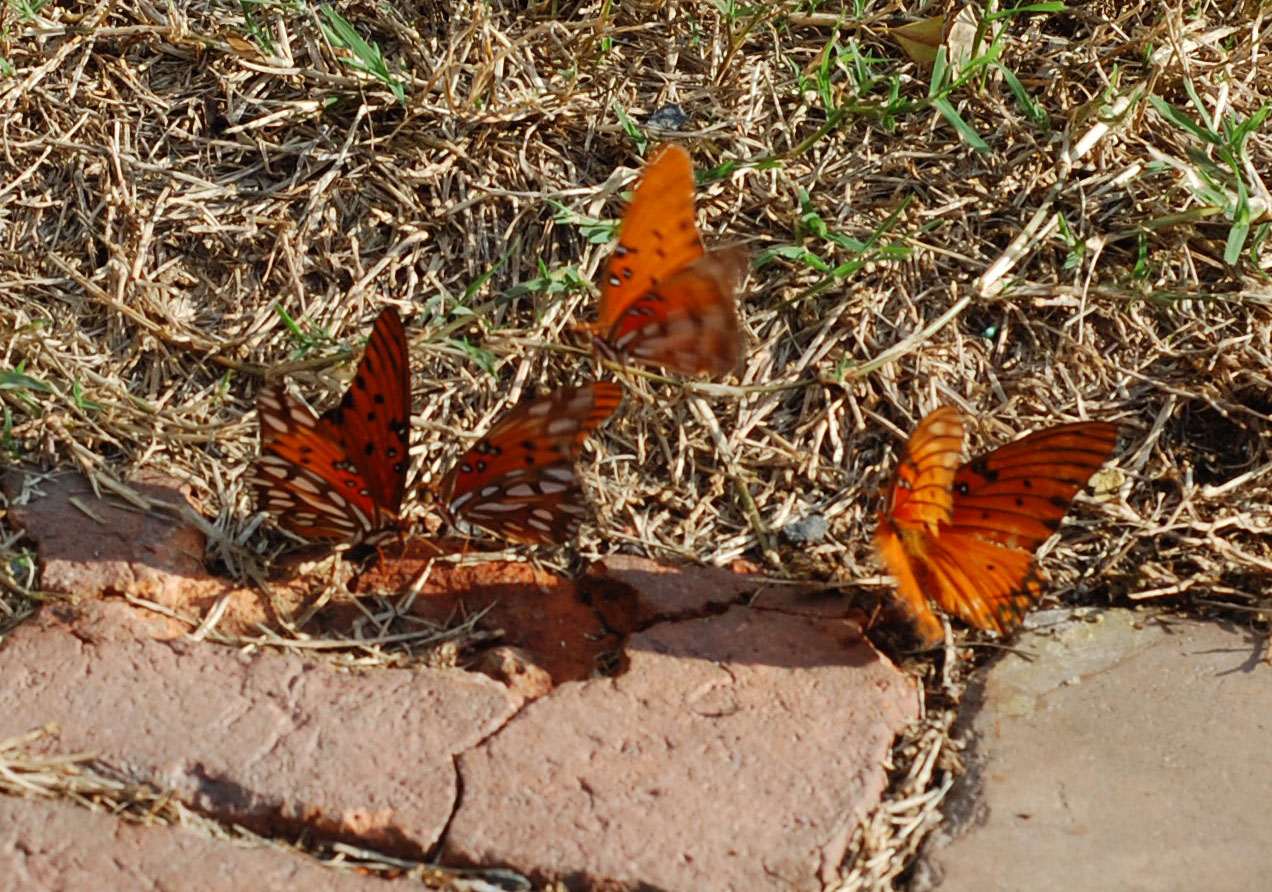 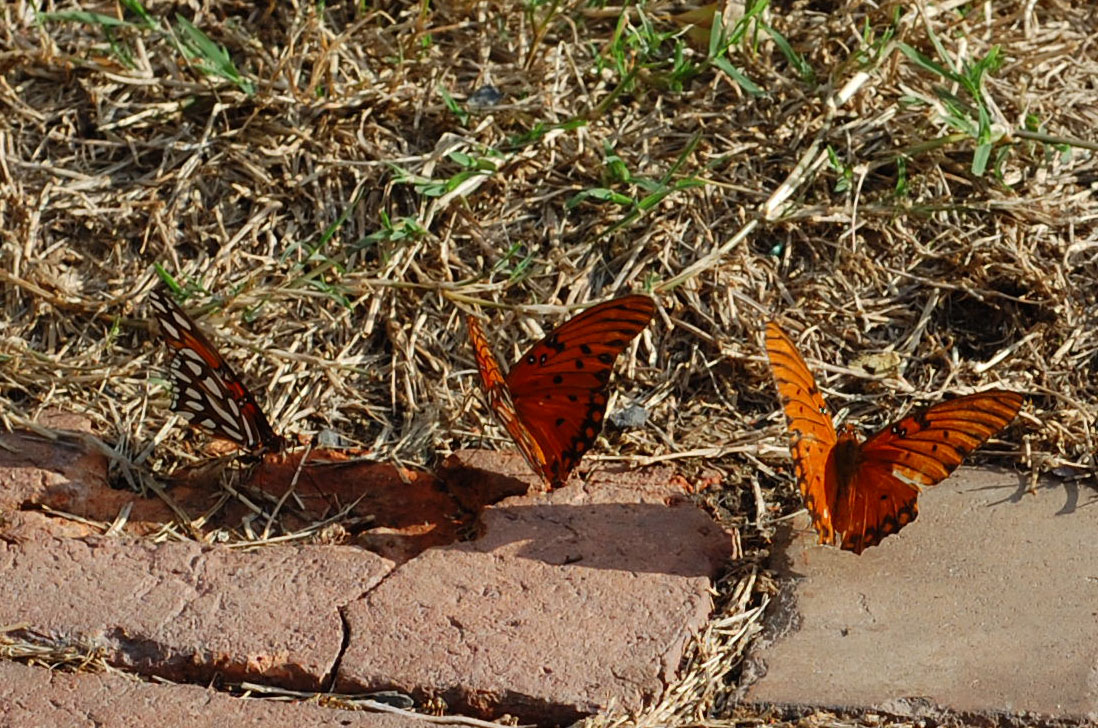