By Heather Iacobacci-Miller October 01, 2012
As I mentioned, Tuesday morning we flew out really early (6:30 am) to head to San Diego for the Social Fresh West conference. It was my first California trip and first social media conference.

The flights were mostly uneventful other than the first leg having an obnoxiously annoying couple behind us who bickered, complained, argued the entire time. Thank goodness it was the short leg of the trip!

The 2-hour time difference meant that we landed in CA at only 10:30 am, that gave us a good deal of time to check out the city on our first day. After checking into the hotel (Doubletree Mission Valley was awesome by the way), we got on the cleanest train I've ever been on and headed to the Gaslamp District. 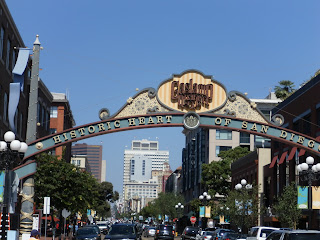 We wandered around until the hunger overtook us. We stopped at Barelymash, a place I had found searching around online. They had veggie friendly fair, cold beer, and an outdoor patio. That's all we needed.

We got their Pretzels n' Dip platter with amazing bread made from barley. I was expecting actual soft pretzels but these were just fine. Incredibly flavorful bread.We also got their veggie burger to share which was fantastic. This was definitely our sort of hangout. And it was even nicer because they had several veggie options to go along with a fun but laid back atmosphere. 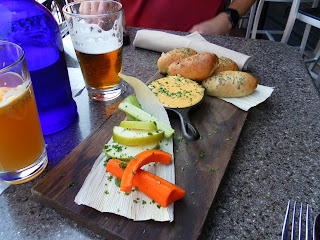 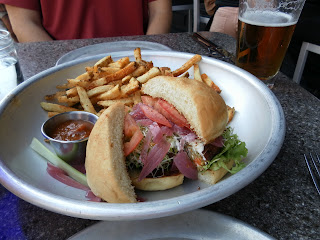 We wandered around a little more before heading to the baseball park. Jason had gotten tickets for the Padres vs Dodgers game, which started at 3:30, which was perfect timing for us. The weather was simply perfect and the ballpark is really amazing. They have lots of vegetation as well as views of the ocean.

And the funniest thing were the pigeons that were congregating out on the field with the players. I tried to get a pic but it didn't turn out. They absolutely did not care that their was a baseball game going on all around them. 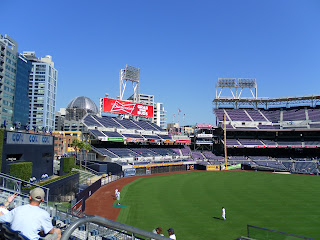 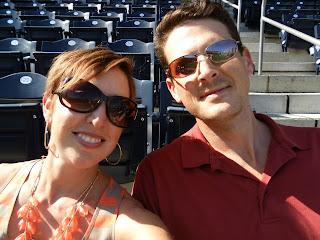 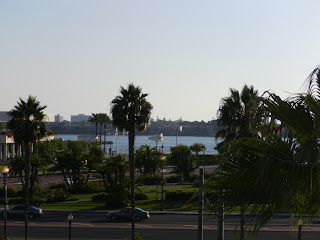 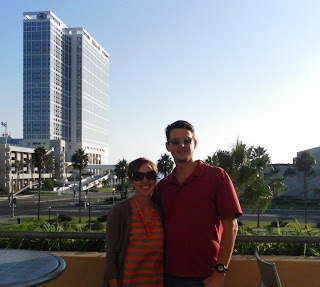 We made it back to the hotel and were both pretty pooped so we ended up ordering Domino's in. Sometimes all you want is to just be done for the day.

The next day we got up and ran. Luckily there was a pretty nice path that followed along the San Diego River. We managed to get in 6.5 miles then it was time for me to start the conference. I did have a break at one point at which time Averie came by the hotel so we could finally meet.

We were both bad bloggers and totally forgot to get a picture. We were too busy gabbing at record speed since we didn't have much time to visit. It was really great to meet her after about 3 years of knowing each other through blogging.

And speaking of blogging, there was another blogger there that is also a fellow FitFluential Ambassador - Tiffany from Heavy Medal (Home of the Running Hutch). I am so glad to have met Tiffany. She's an absolute sweetheart. And it was great talking with a fellow runner and someone who values the benefits of lifting weights (she's into CrossFit). 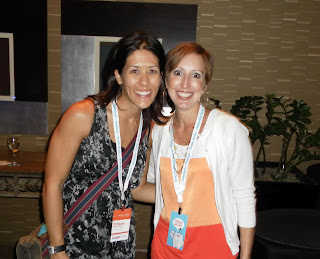 The conference didn't end until about 6 on Thursday. It was really just a long long day so we chose to go to a sports bar - Randy Jones - next door for dinner rather than get out and about. The time change was catching up with us for sure. And I must say that the sports bar had lots of veggie options including the date salad I ended up getting, which was really very good I must add.

Friday morning I got up and took advantage of the hotel's awesome gym. Seriously the best hotel gym I've ever seen. There were 4 treadmills all with tv options or music and 4 ellipticals plus free weights as well as cable machines. I used the elliptical for about 20 minutes then did a full-body weight workout, and added on 2 tempo miles on the treadmill. Then it was back to business (aka back to the conference).

The conference ended a little after 4 on Friday, so we had more time to get out and explore again. From Averie's suggestion, we headed to the Hillcrest area. It's definitely a vibrant, eclectic area. We ended up stopping at a wine bar called The Wine Lover where I enjoyed a fantastic tempranillo and Jason tried their intense red flight. 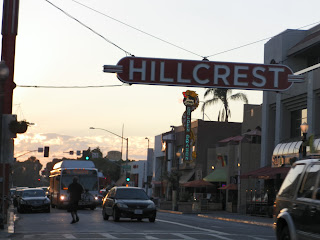 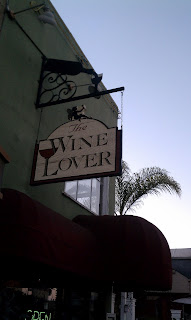 After wandering around some more, we ended up at the Crest Cafe randomly. We ordered their veggie chilli and bamboo basket of steamed veggies. The chilli was really tasty. It's so rare I can get chilli anywhere other than when I make it myself.

This post is already long enough and I haven't even talked about the conference or the rest of the trip. So....Stay tuned for part 2 (lots more pictures).