By Heather Iacobacci-Miller October 29, 2012
Saturday morning I started waking up a little after 5 am. We needed to be up around 5:30 ish to start getting ready for the race. I did stay in bed until the alarm though, just letting myself slowly wake up.

I got up and got on my running outfit. I spent an entire week fretting about what to wear. It was going to be about 33 degrees at the start (sunny thank goodness), but not much of a warmup during the race. I always get so hot when I run and had to keep that in mind. I ended up going with a tank with my arm sleeves and knee-length capris.

I also wore some cheapo throw-away gloves so that my hands weren't frozen solid at the start like they were last year. I tossed them around mile, 4 but there were some winds that came up that often made me regret that choice to toss them.

I have some spirulina pills that I have been taking for early morning runs that really seem to make me alert. I had never tried anything like that until I had the opportunity to review the EnergyBits. I really and truly believe that the spirulina works. It makes you feel really alert, but not jittery or anything like you might feel from caffeine. Just simply awake. So, I had those with a rice cake smeared with lots of chunky PB and topped with a banana. Oh, and water, lots of water.

My running buddy road up to the race with us - it's about 30 minutes from where we live. It was so dark. And so cold. We all donned trash bags to help stay warm before the start. It's a super cute look I promise ;-)

Luckily the location for this race has some great facilities: a gym with indoor bathrooms, locker rooms, and a track lots of people were using to warm up. I waited in the ladies' line for far too long and started to panic that I wasn't going to get to go OR miss the start.

Other than that minor freak out, I was pretty calm. I was just ready to start running to be honest. We lined up with the 1:55 group. I knew that would be the smartest way to start the race. If I felt good, I could break away. But I knew it'd help me not go out too fast if nothing else.

The first mile flew by, the sun was starting to rise and all you could here were thousands of feet hitting the pavement. The route takes this terrible turn (you have to go through gravel and grass and a complete sharp left turn) to get onto a trail which is way too narrow. I started to feel terribly closed in, so Jason and I tried to break away just for sanity's sake basically. I felt like I was going to trip on someone's foot or be elbowed. 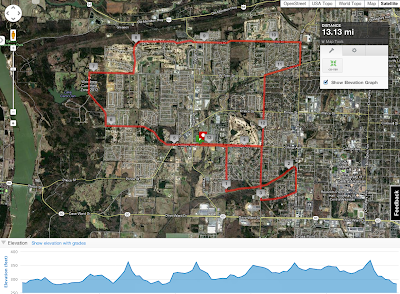 Jason continued to pace faster. I had already told him that if he felt good, go for it. I wanted him to do his best and not wait on me. So I ran my own race and he ran his. The first big hill struck at mile 4. And they sort of keep coming from there on out. Some are just the long graduals, some are the quick ups and downs back-to-back, but I took advantage of the flats and the downs to help keep my pace solid.

I really felt great mentally and physically. I sort of just zoned out. I don't really remember a whole lot of the race to be honest. I was like on this really strange auto-pilot. I do remember needing to pass one guy who had on entirely too much cologne. And then being trapped between two people grunting and groaning loudly. Really annoying, but gave me the necessary motivation to go faster.

There were only 2 times when I had to fight that urge to walk - mile 8.5 and the very last of mile 11. Mile 12 is smack at the top of the last steep hill. I just kept saying, "don't do it. Slow don't but don't walk." I was on track for a PR and knew that walking would blow it. Mind over matter. Mind over matter.

As soon as I crested that Mile 12 hill, I took off taking full advantage of the downhill. I actually ended up pulling out an 8:22 for that last mile. I pushed as hard as I physically could.

I can't wait to see the pictures from crossing the line because they were butchering my last name. If I could have breathed in enough to speak, I would have told them to just stop while they were ahead. My official time was 1:53:32. That's more than a 2 minute PR for that course and about a 35 second overall PR.

I will admit that I definitely got dehydrated. I was running harder, breathing hard, and had a hard time getting in enough water. I only managed to get down about 3/4 of one Clif Gel. I needed to take 2. I just couldn't get it down and couldn't get in the water I needed to get it down. So when I crossed the finish I thought I might pass out. I grabbed a gatorade and got over to a fence to steady myself. I put my head down. Jason got me another gatorade. I got down that gel I missed and tons of water and was fine within about 10 minutes. 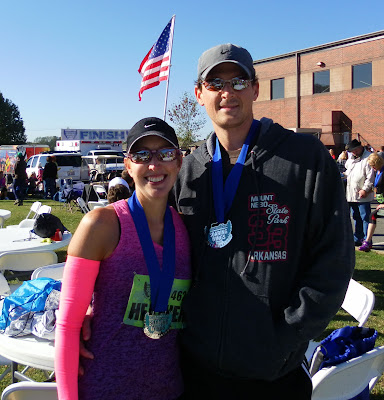 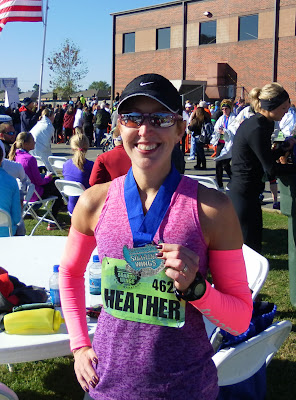 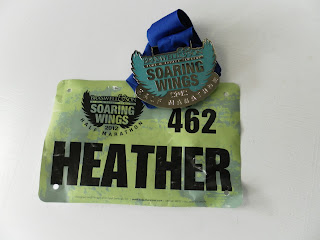 It took forever to get out of Conway and heading back home because of the crowds all leaving. I got home and took a hot epsom-salt bath, pulled on my fancy new compression socks and went into full recover mode - that included pizza and beer before putting our feet up the rest of the evening.

Side note: today is my 3-year blog anniversary!