By Heather Iacobacci-Miller October 08, 2012
Well, we went from Summer to our form of Winter within a few hours on Friday. By 7pm it had gone from 85 degrees to 40's. Rain, lots of rain.

My sister was in town for a conference so she stayed the night. I made some chili as well as more of Sarena's chickpea flatbread. This time I added in green chile peppers, chili powder, red pepper, garlic, salt and pepper. It was so flipping good. Seriously, you gotta check out her recipe! 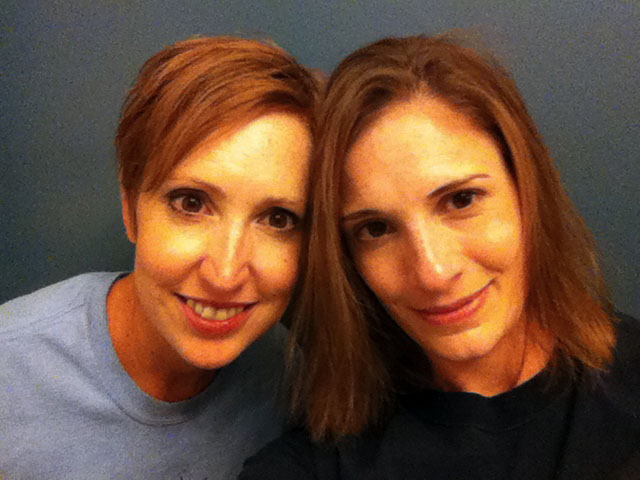 The rest of the night....well.... Basically, we stayed up way too late, drank way too much wine, and laughed our butts off.

Saturday morning was gray and gloomy and right when Jason and I were ready to head out for a run, the storms started. Thunder, lightening, small hail, wind...oh and it was about 43 degrees. So, long run was thwarted. Luckily, I do have access to our company's gym. It's not the best gym, but it's free, convenient, and a really nice perk.

So, I ended up getting in 4 miles on the treadmill then back and abs. And from my vantage point I got to watch everyone driving downtown all sorts of confused. There was a Food Truck Festival going on and clearly these people were not used to driving downtown. Going the wrong way....turning left from far right on one way...running lights...I was glad to be inside and not out there with the crazies.

We ended up meeting up with our friends for a really late lunch. My friend "C" had just finished her test for court reporting, so she was really in need of some time with friends and a drink.

Sunday morning was sunny and cool. I spent most of the morning glued to my computer. Not normal for me on the weekend, but for a very good reason. My friend Jess and her husband were running their first marathon - the Chicago Marathon.

I wanted to see how they were doing before I headed out for my long run with Jason. And it worked out waiting longer. I got in 12 miles, but 10 of them would have been Jess' last 10. I was sending out some major sherpa vibes the whole time hoping she could feel it all the way in Chicago.

It was probably about 56 degrees and mostly cloudy, rather breezy when we set out for our run. We decided to head towards a neighborhood called Hillcrest. Notice it has the word "hill" in the name right? Ok, so hilly. But somehow we were managing a decent sub-9 pace. But it wasn't easy. And it took a toll on my piriformis.

We made it back near our house at 9.2 miles. I simply had to stop and stretch (and potty). I took the chance to check on Jess' status before heading back out. I had really wanted to get in 13 miles. But we ended up with 12.

I was a little frustrated to be honest. I could have gotten in that last mile, but it was going to be fairly miserable. So, I worry about the next half. I worry that running higher miles just isn't in my future no matter how much I want it. It just doesn't seem to get easier at all. And I just don't know what to do about the pain.