By Heather Iacobacci-Miller November 14, 2012
Not so Lazy
Well, while I was super lazy on Sunday (thoroughly enjoyed by the way), I made up for that Monday. My original plan was to go into work a little late. But I ended up going in on time and just took off a little early instead. It was only 3 hours, but sometimes that makes such a huge difference.

This meant I had plenty of time to get lots done including an 8-mile run. Our temps have gone from 75 to barely touching 55 overnight. I ended up slightly overdressing with the exception of the wind for my run. It was sunny, not quite 55, windy. So I wore long sleeves and shorts. Like I said, if it hadn't have been for the cold wind, I would have been miserably hot.

I really was feeling wishy washy about the run. I knew once I got out there and going I'd be just fine. But sometimes I get this weird trepidation before heading out. I have no idea how to explain it. I just get a little anxious.

Anyway, my goal was 8 miles at an easier pace. And I did just that.

After my run, I took a hot shower then spent some time on my Triggerpoint rollers and stretching before deciding to tackle some projects/chores.

I managed to get 4 loads of laundry done and mostly folded, dusted the house, made some vegan Black Bean & Tempeh Chipotle Enchiladas (casserole style) for dinner and also made some Curried Pumpkin Soup for tonight. I figured I was already in the kitchen making a mess, so why not get 2 meals done at once. I didn't bother taking pictures of the enchiladas...they always look like such a mess anyway.

For the soup, I mostly followed this recipe but used bell peppers as I was out of carrots and did not use coconut milk as I was out of that as well. I also used one of the big big cans of pureed pumpkin that I scored on a dented can clearance. Don't know about you, but I don't care if the can is dented but I'll certainly take the clearanced price ;-)

Tuesday night the plan was to run 5 miles with my running partner. I went home, changed, then ran down to her office. The temps had topped out earlier at 54 degrees but were dropping quickly as the sun began to go down. I swear I always forget how to dress myself this time of year.

During the summer it's simple: take water and wear as little clothing as possible. Now? It depends on the wind chill, the time of day even. I ended up in long sleeves and capris and my arms were hot but my hands frozen. "A" wore shorts and long sleeves with gloves and she ended up warm up top but frozen legs. And the temps just continued to drop pretty quickly. By the time I got home it was 45 degrees.

We had a really great run. It's been over a week since we've been able to run together so lots of catching up to do of course ;-)

Anyway, it worked out perfectly having the soup pre-made. All I had to do is re-heat and then toast up some curried chickpeas to go on top. Not only was it perfect b/c it was already done basically, it was also warm and comforting after the run. 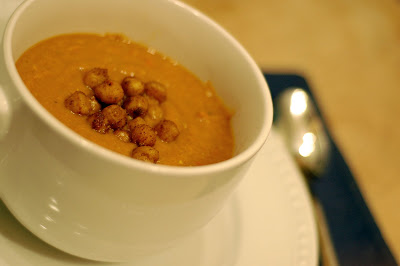 I really should plan out meals like that more often. Are you good at planning out and prepping up meals for the week?


Brittany at Little B's Healthy Habits for making it in Oxygen Magazine!

Mrs. Stuftmama for being crazy enough to run a half marathon with a double jog stroller with a 1:37 finish. AMAZING

Pavement Runner for his well-deserved mention in the latest Runner's World magazine. So cool!

Angela at Happy Fit Mama for knocking out a PR at the Seacoast Half Marathon.

Miss Zippy for being a pacer. I think pacers rock!

Your turn - who do you want to give a shout out to this week?