Running Plus New Mizunos and a Bike


No Double-Digits
Saturday morning we got up fairly early, but not to get in a long run. Instead we got ready and hit the road for a 2 hour drive to buy a bike I found on Craigslist. Yep, I'm now the proud owner of a Specialized Dolce. After picking up the bike, we had another 2 hour drive back home. 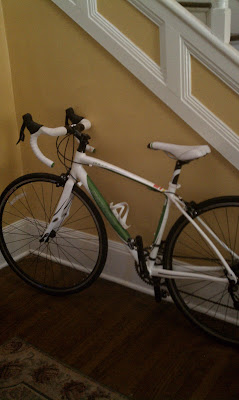 It's amazing how 4 hours on the road can sort of zap you. It's not like I was doing anything other than sitting and getting really antsy. We got home just before 1 and the day was gorgeous, but definitely warmer than I would have liked for a long run.

My legs were incredibly heavy feeling from the start. I had pretty much resolved myself to the fact that I was not likely to hit double-digits. It was just hot. Almost no wind. And for whatever reason, there were tons of unsavory characters out milling about. This made me run faster, but that did not make my legs happy at all.

I ended up giving up on the 10 miles at mille 7. I didn't even have the heart to try to push on at that point. So no double-digits, but I got a bike ;-)

Jason wasn't feeling very well Saturday, so it ended up being a very low-key day of couch sitting.

Much of the Same
Sunday I got up and just piddled around. It was pretty cool, and I was feeling lazy about a run. So I figured I could procrastinate for a bit. I had thought I might run 4 miles then we could take the bikes to a parking lot so I could practice and get the hang of the new bike. But, the bike came with clip on pedals and I don't own clip on shoes.

My running partner has some pedals, but she couldn't find them. So, after procrastinating, I ended up going out for a run. I just wanted something easy, planned 4 miles. It turned out to be a great run day for me though. Man I should have held off on the miles Saturday and done my long run Sunday was all I kept thinking.

But, I didn't push it. I stuck to lower miles even though I had that little spark of an idea to go for 10. I stopped at 5, went in and stretched and rolled out.

Since I couldn't ride the bike, I went ahead and cleaned up and we stopped by my favorite local running store. My shoes are in sad shape. I blow through them like crazy because of the way I run. I supinate and run really far up on my forefoot. Almost to a fault really. My heels never hit the ground and the insides of the shoes don't either. Absolute opposite of someone who pronates.

Anyway, this means that I can barely get 3 months out of my shoes. I literally wear the tread right off down to the white of the shoes. This gets expensive I must say. I am very loyal to my Brooks Ghosts. However, I really felt that I needed to try something different. Maybe a different shoe will be better for me. I am trying to even out my landing, and it is getting better, but sill destroying shoes.

I had read that with high arches and the supination, I might look into more cushioned shoes. I ended up with a pair of Mizuno Wave Riders.

They really seemed to have more arch support. It's really rare I find shoes that even touch my arch. They just felt right. So I thought I'd give them a shot. I hear rave reviews about the brand.

And More Running
Today the plan was to meet up with my running buddy for a lunchtime run. She's off all week so it worked out great to meet up midday. It also gave me a chance to try out my new shoes.

It's another gorgeous day out, but definitely warm for running. Neither of us brought water and both regretted that decision. I had gotten used to not having to carry water for 5-milers when it was about 10 degrees cooler. Oh well, it was a good run regardless.

My new shoes felt fantastic. I had gotten the laces a little too tight so had to readjust but then they were perfect. They really seem to hug my feet like no shoe has before. I'm really glad I made the decision to try them out.

Do you get nervous to try out a new shoe? I have had so many issues with my feet that I just worry that I'll end up in something that hurts them even more.