By Heather Iacobacci-Miller December 18, 2012
Recapping
This weekend was pretty good. I was able to get out of the house for a bit on Saturday. Jason and I walked close to 4 miles before getting ready. I actually put on real clothes, did my makeup AND hair. I felt human again. The weather was fantastic - about 70 degrees and sunny.

The first stop was my piece of hell on earth - Toys R Us. I needed to get a doll for my niece and had a Groupon that could only be used in stores. Of course. I would have gone earlier, but the whole blood clot ordeal has cramped my style. I walked in and the lines were all the way into the aisles. Carts piled high with toys, and screaming, crying, cranky kids abound. Fun.

I found the doll quickly and was so lucky to have ended up in line behind a very kind lady. I think she saw the terror in my eyes as I clutched that darn doll tightly. She let me go in front of her as I only had the one item. I guess some people are still kind after all.

We had a few more stops to make for other gifts that I had not been able to go shopping for. Then we met up with some friends at a place called Bosco's. They have a patio that overlooks the river. Hard to beat a patio lunch in December.

Sunday, I walked with my running buddy. It was hard to not want to run with her, but we just chit chatted for 4 miles, meandering the neighborhood, checking out houses and holiday decor. After the walk, I basically just stayed in the rest of the day.

Yesterday I had a follow-up doctor's visit. I didn't really expect to hear anything new, and I didn't. He does think that the clot is starting to dissolve at about the same rate it would if I were on Coumadin. The vein and swelling has definitely gone down compared to what it did look like. I do have a slight achiness in my clavicle area.

He wants me to see a hematologist this week. Apparently the lab did not run the hypercoagulation panel that the doctor had requested. So he feels it would be ideal for me to see a specialist at this point, especially considering I'm acting as a guinea pig with the new medication.

Steak Night
Last night Jason wanted me to use the fingerling potatoes he had picked up. We also had some green beans that needed to be cooked before they went bad. I ended up going with more of a "meat" and potatoes type of dish. This made Jason happy of course.

I didn't have any homemade setian on hand or any other meatless cutlet/steak for that matter. I didn't have enough vital wheat gluten to make seitan either. So I decided to get a little creative and come up with something a little heartier than simply baking off tofu.

In a food processor, combine all ingredients minus the oat flour and flax.

Transfer to a large mixing bowl and mix in the flour and flax until well combined adding more flour as needed. You want it to be fairly firm. Re-season if needed.

Form into steaks or patties and place on a prepared baking sheet. Bake for 20 minutes then flip and bake another 20 minutes or until firm and golden. 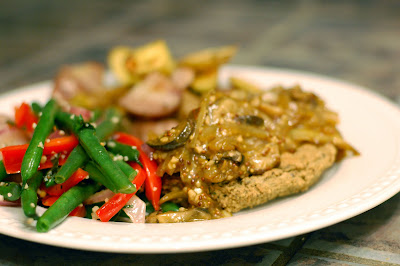 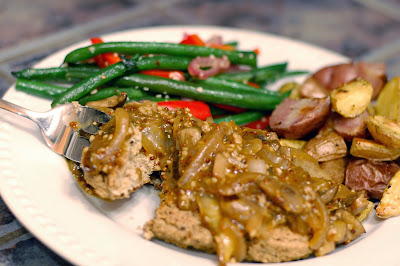 I made an easy mushroom sauce by sauteeing white onions until soft then adding in a variety of mushrooms, garlic, salt, pepper, thyme, vegetable broth and whole grain mustard and allowing that to simmer and reduce.

I was very pleased with how the steaks turned out and so was Jason. I actually made a few into patties so we can enjoy as burgers later in the week.