By Heather Iacobacci-Miller January 14, 2013
Gotta Love Cathe
Well, I haven't really been talking much about workouts lately. I'm trying to get back to running. It's still really hard right now. I go back to the doctor on Thursday and plan on having him try to text my iron levels as well as whatever else they'll be testing. I just feel wiped out and need to figure out the cause. Is it the clot, the medication or perhaps iron levels.

This weekend we had crazy weather. It was in the 70's on Saturday with bouts of rain. By Sunday it was barely 40 degrees with even more rain. I had hoped it'd clear up long enough to get in a run, but that wasn't going to happen.

I ended up testing out 2 of Cathe Friedrich's DVDs from her Low Impact Series. My sister has been holding these DVDs hostage for quite some time. I finally got them back from her on Saturday and was eager to test some out.

Unfortunately for me right now, they pretty much all use weights. However, I was able to modify enough and still get in a good workout. Cathe never really disappoints, so I knew they'd be good workouts.

I tried the Cardio Supersets and then the legs and abs from Turbo Barre. The Cardio Supersets was a great, sweaty workout. It's low impact, but don't let that fool you into thinking it's easy! The Turbo Barre is a definite booty killer. Great for targeting your bum and outer thighs. It sort of took me back to my ballet days. I even donned my old slippers just for fun.

Do you have any favorite instructors you know you can always rely on?

Tex-Mex Monday
I had originally intended on making chili today as it was hovering in the low 30's, gray and gloomy. However, Jason had some leftover green chili for lunch. I didn't figure he'd really want chili again for dinner even if it was a different color.

I've been pinning a lot of recipe ideas recently, so I went back to my board for some ideas. I was inspired by this recipe from Perry's Plate for Stacked Roasted Vegetables Enchiladas. Definitely check out her recipe. It looks amazing.

I started out by making my Chipotle Enchilada Sauce. While I was making the sauce, I roasted up the veggies so it worked out nicely being able to take care of two pieces of the puzzle at once. So here's what I came up with.

Add veggies into a glass baking dish. Toss with drizzle of olive oil, garlic, and seasonings.

Bake approximately 30-35 minutes or until veggies are soft.

In a glass baking dish, add a small amount of the enchilada sauce to the bottom (to help prevent sticking). Add a layer of the tortillas. Top tortillas with roasted vegetables. Next top with black beans. Now add a layer of sauce then top with Daiya. Repeat once more.

Bake casserole for approximately 25-30 minutes or until cheese is nice and melty.

Directions:
In a large saucepan, saute onions and garlic until onions begin to soften. Add in remaining ingredients. Remove from heat and lightly puree with blender or immersion blender (I like mine to have a little texture to it).

Return to heat and allow to simmer for approximately 25-30 minutes. Re-season if needed. 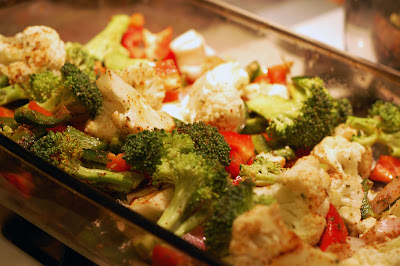 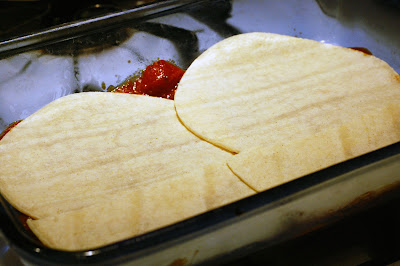 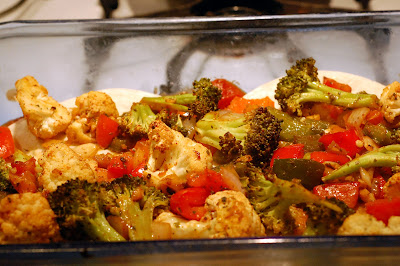 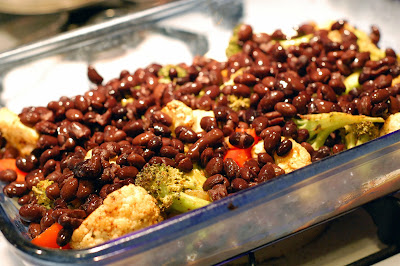 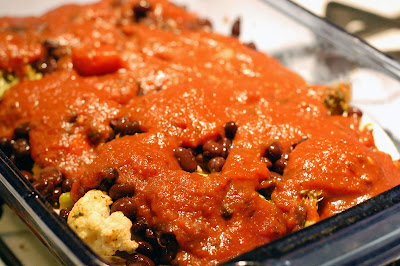 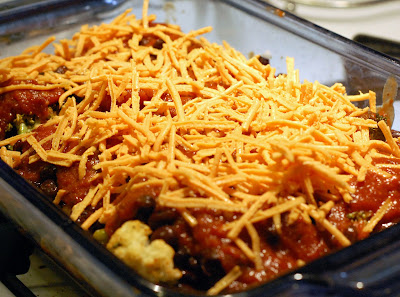 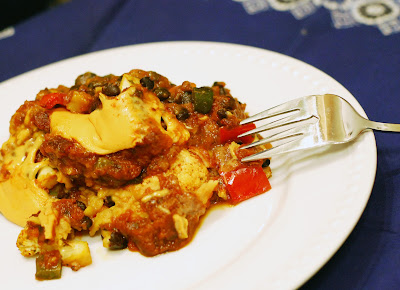 This turned out really well (despite the look of the picture). I did get the sauce a tad on the spicy side, but good for clearing out the nose right ;-) It was definitely a nice change from the typical enchiladas that I make. And it's hard to go wrong with ooey gooey Daiya on top too.