By Heather Iacobacci-Miller January 02, 2013
As I promised yesterday, I have a new recipe to share. The inspiration for this recipe came from a recent lunch at a place called Ya Ya's Euro Bistro.

Unfortunately (or maybe fortunately because I'd be there way too often otherwise), the restaurant is clear across town. It wouldn't be quite as bad to get there if there wasn't major construction going on that direction. In other words, traffic stinks and it takes a good 20-25 minutes to get there.

But once you do go, it's worth it. I've eaten their twice. Jason has never actually eaten there, but he's been wanting to for quite some time. We had some dear friends in town with their newborn. They were able to meet us on Christmas Eve day. Not many places were open around town though. However, Ya Ya's is in a shopping complex, so I knew they'd be open.

Our friend "B" is someone who really appreciates good food. He used to have us over for dinner when he lived here. Long story short (too late right?), we knew he and his wife would be happy with the venue as would Jason even if it meant a longer trek for all of us.

We were all pretty hungry by the time we go there so appetizers were a must. I have had their hummus before, so that was appetizer number one though it was a little too oily this time. The second was an Eggplant Caponata. The caponata was simply amazing. It was so rich with textures and flavors. I knew immediately that I had to figure out how to recreate it.

Jason had picked up some eggplants at the grocery store and they really needed to be used sooner rather than later. Perfect excuse to test out a new recipe in my mind.

I did some searching on the internet for recipes and found that it is a Sicilian eggplant dish that often includes fried eggplant, celery in a sweet and spicy sauce. There are, of course, many variations on an caponata. Not just the cooking methods (roasting, frying, sauteing), but even the ingredients used.

I sort of did a pick and choose method between a few different recipes, because who follows a recipe right? ;-) Basically I didn't want to fry the eggplant, sauteing sounded easier and used less pots and pans. I love heat, but also wanted to make sure to include the raisins to offset the heat. And pine nuts were a must. So I bring you - my version of Eggplant Caponata.

Directions:
In a large, non-stick skillet saute onions, garlic and eggplants in olive oil for approximately 5 minutes or until eggplant begins to break down.

Add in remaining ingredients up to the pine nuts. Cover and allow to simmer on low for approximately 20 minutes.

Add additional water or wine if needed. Stir in pine nuts, cover and continue to cook another 10 minutes or so, or until the eggplant has broken down. Uncover and let any excess water/wine simmer out if needed. 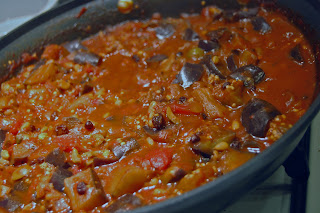 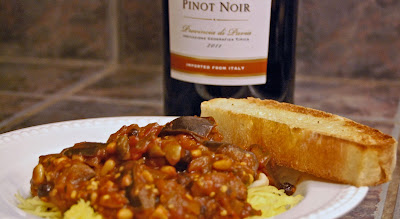 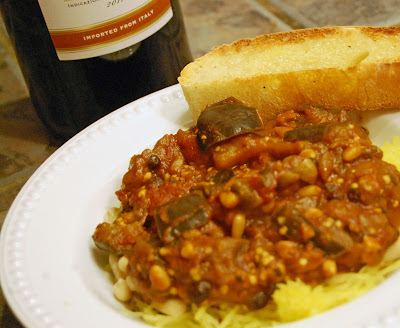 I was very pleased with how this turned out. There were just a few tweaks needed, which I included in the recipe above. I made the mistake of adding in the pine nuts too soon as I was cooking mine differently than two of the recipes I had looked at. So they lost some of their texture. I think raisins would be better than currants, but that's just from a texture perspective.

Do you ever try to recreate a recipe?

Lindsay for inspiring so many amazing "Word" posts for the new year.

Christine (Love Life Surf) for ending the year with a 5K.