By Heather Iacobacci-Miller January 21, 2013
Dismal Run but Wonderful Family Time
This weekend ended up being far better than I had expected. Initially, Jason and I had no plans. I was supposed to have lunch with my mom and sister next weekend to celebrate my mom's birthday, which was the 18th. Things changed and mom and sis ended up coming up on Saturday.

Saturday started off with one of those dig-deep-to-finish runs. I had set out to do 4 easy miles. I wanted it to be slower, easier, just enjoying being outside. I ended up over-dressing. It was 32 degrees when I started the run, but it warmed up faster than I expected.

I also encountered far more creepers (aka vagrants and un-savory characters) than usual, so that meant I instinctively ran faster, faster than intended, and faster than my body needed. I never got my breathing on track so I felt like I struggled the entire run to breathe easily and to even hit a nice rhythm.

I had to stop at mile 2 to take off my gloves then I had to stop each mile after to try to recover. Honestly, I was pissed off by the time I was done. I felt like I was failing somehow. I know, irrational. My body is not functioning as it should. My endurance is down. My energy is down. I should cut myself some slack. Yes.

But I just wanted another good run. I needed it to make me feel more normal, more healthy I suppose. And it didn't happen. Jason actually said, "You looked like shit when you came through the door." Yep. That sums it up.

But, the day improved because I got to spend time with my sister and mom. We started off at the mall to do some shopping. My mom's not a big shopper unless my sis or I am with her. She found a gorgeous little black dress on clearance + 40% off at the Limited and a super cute shirt. Then she found another cute shirt at New York and Company.

After the shopping, it was time for lunch. We ended up at a place downtown called Dizzy's Gypsy Bistro. We had the best time laughing, eating, drinking wine, laughing some more. It was just what I needed after a trying week.

Honesty and Yoga
Speaking of trying, I keep getting comments, sweet, kind comments, about how strong I am, how great I seem to be doing with this whole blood clot issue. Honestly, it makes me feel like a bit of a fraud. Yes, I'm dealing with it. I'm doing my best to be positive, to realize it could be soooo much worse, to be thankful, grateful, etc.

BUT, I do have my meltdowns. I cry a lot. I get pissed off, a lot. I'm tired, just so tired on so many levels. I don't share all of that because I don't want to be a downer. It'd only make things more depressing for myself too. But, I don't feel like I'm strong or inspiring or anything like that.

I feel like a huge mess to be honest. I feel like I'm just getting by the best way I can, maybe even partially by denial. And the support I get from you guys means more than you could ever possibly know right now. And I guess I'm just confessing this so you all realize how insanely human I am. I'm struggling. And all I know to do is try to find the positives no matter how minute they might be.

I guess I'm sharing all of that because everything just sort of came to a head on Sunday. After the less than stellar run on Saturday, I was just feeling down, angry, annoyed, and frustrated. I had planned on running on Sunday. I had it in my head I was going to try to get in 8 miles.

But, my body just wasn't going for that idea at all. And mentally I wasn't up for it either. So I ended up doing myself a favor, I didn't try to push through a run just because. I didn't force anything. I decided I needed to take a big step back. While Jason laced up and geared up for a run, I pouted for a minute (or 15 or 20) then I went upstairs and put in a yoga DVD. 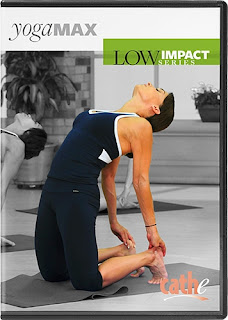 I went with Cathe Friedrich's Yoga Max from her Low Impact Series. To say that this was just what I needed is an understatement. It was calming and helped me to clear my head. I'm so used to Cathe's voice from years of doing her DVD's that it was like hearing a friend talking to me. And she also said something that almost brought me to tears:

"Don't be judgmental to your body. Respect your body. Be happy with what it's giving you today."

Another bit of honesty time, I am terribly judgmental about my body, especially right now. It's not doing what I want it to do plain and simple. I've gained weight, I'm unable to workout the way I did, things aren't the way they were 2 months ago. Period. No matter how much I want to pretend that I'm back in the game, I'm more like warming up on the sidelines, or maybe the locker room.