By Heather Iacobacci-Miller January 03, 2013
Eat Your Veggies Salad
I'll start with something lighter before moving on to the nitty gritty. Last night I decided to roast up the beets and butternut squash I had on hand. I had originally wanted to use the beets to try to recreate a salad I had out, but decided I wanted to do more of a roasted veggie salad.

What ended up happening was a concoction of roasted beets and butternut squash with wheat berries (was going to us quinoa but was out), chickpeas, spinach, Honeycrisp apple, feta, and an orange vinaigrette. 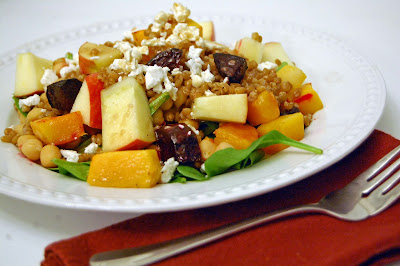 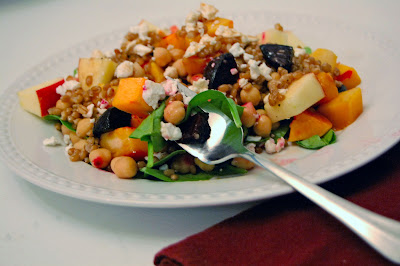 The apples did take it more towards a warmer weather dish, but the veggies were still warm as were the wheat berries. I did like how the apples added both crunch and a hint of sweetness to help offset the earthiness of the beets.

I am glad I went with the wheat berries. I think they added a nice texture to the dish as well. I love quinoa, but it really has no texture and sometimes you need that chew in a dish.

Let's Talk Blood Clots
Today I FINALLY got in to see the hematologist. Because of the winter storm we had last week, I missed my appointment and their offices were without phone and power until yesterday.

I called first thing yesterday and was greeted by a wonderfully rude person who flatly told me that I had to call back in 15 minutes because the person taking appointments had a line in front of her and she hung up. Um...wow. Let's just say blood pressure went up.

I called back about 30 minutes later only to get the same rude lady answering. Lucky me right? I told her I was trying to reschedule an appointment so she told me to hold. I held...held...then the phone rang and rang right back to her. Again, repeat. Then hung up on. Then repeat. She finally said to give her my name and number and hung up. I knew she wasn't passing that info along though. You know how you just know those things.

I got there and it was simply insane and chaotic. I don't know if it's always that way or just because of the office having been closed and trying to squeeze everyone in. The chaos made me even more nervous than I already was. I knew I was going to have to give blood and that always freaks me out. I've flat passed out from giving if that is any indication of how high my anxiety is.

They shuffled me back to the "lab" area almost immediately. The lab was just inside the doors separating the waiting room from the back. There were 9 or 10 chairs filled with people having blood drawn. Nice and cozy. Very inviting right?

They initially put 3 vials beside me then went back and got more (It was either 6 or 7, I stopped trying to count). I wanted to vomit. Luckily, the lady who drew my blood saw my anxiety, or maybe it was the tears, and gave me a fan so I could keep myself cool. She was really amazing. I only hope I get her again in two weeks.

After the draw, I was sent back to wait. An hour later I finally got to go back but only to have someone else enter data and ask questions, then another 20 minutes before the doctor came in. At least he was very personable.

I don't really have tons to report though. He wants me to stay on Xarelto for 3 months adding in a daily dose of baby aspirin. After it's gone we can focus on the cause. If it's not genetic, then there is a 1-2% chance each year of another clot. Not high, but too high for my liking.

(Men you can skip this part) They have taken me off birth control just in case that's the cause. The problem with that is I have used birth control pills to control my endometriosis. So no pill means insane cramps, migraines, heavy bleeding, and no real schedule. Being on blood thinners makes things worse.

He gave me the OK to run but doesn't want me lifting weights. Oh, and no spicy foods. Clearly this doctor has no clue who he's talking to! I live for jalapenos and sriracha, weight lifting and running.

Confession, I've started trying to add in running with the walking. When I couldn't get in to the doctor, I started doing a lot of research on my own. I finally founds some really good articles that gave me a better understanding of the situation. One study found that exercise actually creates an overactive fibrinolytic system (that dissolves blood clots). So exercise is actually ideal in that case.

However, the running? It's hard. Really hard. I tire really easily and am really out of breath to the point of having to just stop moving for several seconds then walk. He thinks that being short of breath is a result of the clot dissolving - apparently it releases some sort of hormone that can cause you to feel very anxious and even short of breath. However, if it continues, then it could be that I had a clot in my lung. But, I'm already on treatments for clots anyway. So not a huge deal really.

I feel like it's still a long road ahead trying to get this dissolved then moving on to trying to figure out the cause then prevent future clots. It's hard to believe it's already been 4 weeks of this as it is.

Sorry for the insanely lengthy post. So many of you have expressed concern, have emailed for updates. So I thought I would share. Who knows, maybe someone will read this that's going through something similar. Maybe I can help someone else in this same situation.