By Heather Iacobacci-Miller January 08, 2013
My friend and running buddy had been really sick Friday with a stomach flu going around. I know she's sick when she told me she wouldn't be getting in her long Saturday run. Somehow we ended up chatting about pumpkin, pumpkin bread, muffins...that sort of thing. I think she was hungry, what do you think?

I started looking around on Pinterest and shared several recipes with her. Then I found one I had pinned a while back and decided I would make that for her. You know, a get well gift. Plus all the recipe searching had gotten me in the mood to bake.

So, Saturday morning I made this High Protein Pumpkin Bread by The Iron You. I did make a few substitutions and additions.
Pumpkin Protein Bread (recipe based on original by The Iron You)

In a small bowl, combine NuNaturals Baking Blend and molasses (or you can just use 1/2 cup brown sugar)

Slowly fold the dry ingredients into the wet mixture until just combined, without over mixing, adding in the vanilla stevia if desired.

Pour the batter into a prepared loaf pan and bake 45 minutes. Be careful not to over-bake. You can use the toothpick trick to see if the bread is ready.

I had originally miscalculated the calories per loaf at 590 (estimating that I used 1 tbsp of molasses, though it was probably less). But had forgotten to add in the calories from the coconut oil, oops. So that brought the total to approximately 1060 calories for the entire loaf and 31 grams of protein.

The protein count was lower as I used a brown rice protein powder, which tends to be lower in protein than a whey powder. So if you're wanting to beef up the protein then you might choose a different protein option.

If you got 10 slices out of it (which would be good sized portions) then that's a tad over 100 calories per slice. Not horrible by any means. Plus you get vitamins, fiber, and protein, all with no sugar. I think you could probably cut some of the oil by adding in either banana or unsweetened applesauce if you wanted to lower the calories even more.

The bread was incredibly moist. When you first bite in, however, it's not very sweet. Not a bad thing mind you. The sweetness hits you later on. And I think that might be due to the use of the NuNaturals Baking Blend perhaps. I've not baked with it enough to really know though, and I've not made this recipe previously. 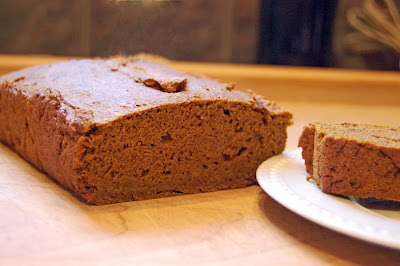 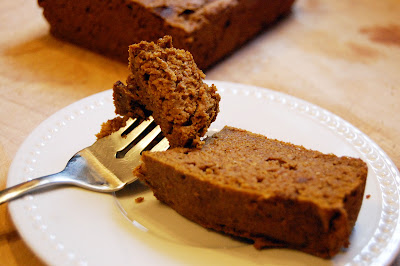 I will definitely make it again. Next time I think I'll add in more molasses and more of the vanilla stevia. I might also use a chia or flax egg as well. If you like pumpkin bread and aren't expecting a cupcake, then this recipe is perfect. A much healthier option for satisfying your sweet tooth.