By Heather Iacobacci-Miller February 20, 2013
Sky On Fire
This morning I peeled myself out of bed to get in a run before the sleet moved into town. "A" and I were going to run after work, but Mother Nature had other plans. She couldn't run in the morning, so I was going to head out solo.

But, Jason said he'd give it a shot. So we headed out into the cold, windy morning around 6 am. The skies are starting to get lighter around 6:20 am though. Such a refreshing change.

And as much as I hate the cold weather, there's something quite invigorating about a cold run. It was in the low 30's - not sure what the windchill was at that time, but looks like mid-20's - as long as we weren't heading north into the freezing, heavy wind, it wasn't too bad.

What made it all worth it was the sunrise. It was simply spectacular. It looked like the sky was on fire with the deepest pink, almost red creeping up from the east. I wanted to take a picture, but didn't think I could get a good one with my phone. Plus, that would have meant halting our pace/rhythm and fumbling with pulling off gloves. 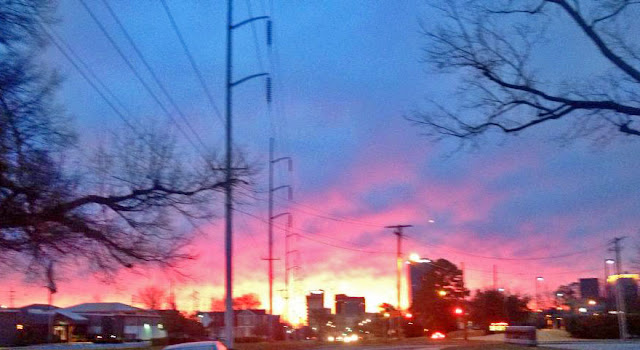 However, a running friend did take the time to get a picture and she said I could use it for the post. And, like she said, even this doesn't do the sunrise the justice it deserved.

I'd say that sure made getting up early and running in the cold absolutely worth it.

Averie from Averie Cooks has a new cookbook out - Peanut Butter Comfort. I have a feeling it's just the first of many to come from this awesome friend!

Mr. Pavement Runner is at it again with a recent half marathon PR!

Melissa at Live, Love and Run for getting her NASM Personal Trainer Certification!

Jolene at Determined to Be for a secret I can't share (no babies), but wanted to send her a congrats anyway ;-)