Well, I wish I could come into Monday's post raving about some awesome runs or even crazy 14-mile adventures. But, I can't. I didn't run this weekend. I won't run today. I may not run again until my half marathon on Sunday (fingers crossed I can then).

After my 10-mile run on Friday, my left foot seized up. Hello there plantar fasciitis. We meet again. I won't pretend that it hadn't been acting up. It has been. But I've been babying my foot. Icing, rolling it out, rolling out my calves, stretching like it was my job.

During the run on Friday, it wasn't bothering me terribly. It hurt a little here and there, but nothing sidelining. But the minute I stopped running, I was literally hobbling along. I've iced it, stretched it, and stayed off of it as much as possible.

I did get to try out some of the new Cathe Xtrain DVDs at least. I'll call that the upside of this for now. Hello DOMS.

I was talking to my sister on the phone about the race. And about just simply being so frustrated at everything: piriformis issues, plantar fasciitis, oh and that pesky blood clot situation. I had such high hopes of a great race on Sunday. I've been working so hard. My speed has increased. My endurance and stamina have increased. And now this. Just one more thing.

Yes, I've cried, I've cursed (a lot), I've moped. But I'm going to have to just suck it up and deal with it. Plain and simple. It kind of is what it is I suppose. I can wallow or find an upside right?

Well, then my sis sent me this picture. 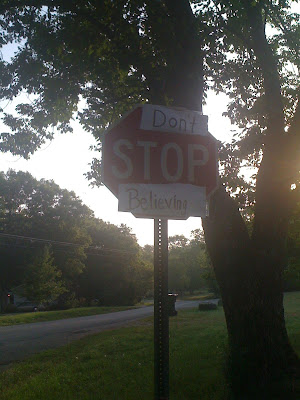 She was in a really low place when she saw this and stopped and took a picture of the sign. Talk about a true sign huh? Not only is it a beautiful reminder, but it also made me realize that others are going through bad things too. She's hit some major low points and come through them. I will too.