By Heather Iacobacci-Miller March 22, 2013
If you've read my posts this week, you know we've had a super sick dog. Our Heath Man has spent most of the week at the vet. He was diagnosed with Gallbladder Mucocele.

It's pretty serious. He's been a very very sick boy. And we've been very very worried fur-parents as you can imagine.

Thankfully, he started to finally eat, drink water, and potty yesterday afternoon. He was still mopey, but they thought it might be because he was getting depressed and missing us. So, they let him come home. When he first walked in the door, he was his super chipper, bouncy self.

He ate about half of his dinner, then pretty much laid down the rest of the evening, not nearly has peppy, but certainly better than he had been on Monday. Still kind of hard to watch. Of course, we have no clue what the medicines' side effects could be. He's on 4 different meds. We all know how meds can affect us too. So I would assume they'd be the same for dogs.

Basically, we have a long road ahead and are just hoping and praying that he pulls through. That the medications and the new diet help. The only other option might be surgery, but the mortality rate with that is really scary too.

But, it's Friday. And I want to be happy (even though it's cold and rainy here). Since I've been talking about my furbaby this week, I thought it was only appropriate to keep up with that "theme" for Fun Facts Friday. 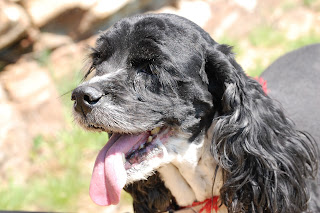 Your turn - share something about your furbaby (if you have any). Rescues? Crazy habits? Crazy nicknames?