By Heather Iacobacci-Miller April 19, 2013
I guess this is one of those non-normal weeks for posting. I think everyone is sort of feeling that too. So, rather than a typical Fun For (or Facts) Friday, I want to just mention something I will be a part of on Monday. Maybe mentioning it will inspire you to participate as well. I have a feeling so many of you are already planning to be a part of this.

I can't say enough how inspiring Brian (Mr. Pavement Runner) is. He's always so upbeat, enthusiastic. He's also an amazing runner tackling one major race after another. He's a proud father and loving husband. And if you don't read his blog, you should.

Oh, and he's done it again. Brian suggested a fantastic idea, one that is really catching on too - A Boston Run in Your City. The events are all happening on Monday, April 22. And, basically, the idea is that each city unites runners to all run together in tribute/honor/memory of Boston, one week after the horrible tragedy. 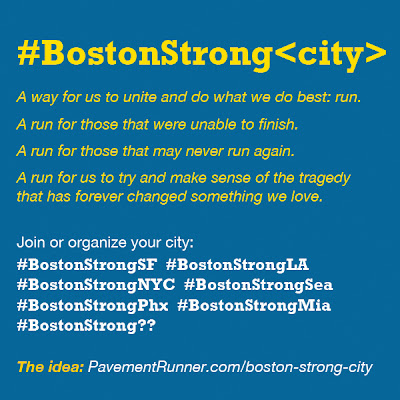 Immediately I knew this was going to catch on and be something amazing. I'm not sure if Brian fully understood this when he wrote his post. Maybe he did. He has to be so proud. I know I am.

I shared his idea with a local runners' group I belong to on Facebook just to see if anyone would be interested. I had no idea how to best approach setting something like this up, or setting it into motion. So I was hoping for some ideas, thoughts, chit-chat perhaps. But all I had to do was put the idea out there. It was openly received immediately, and now it's officially happening.

Of course I knew the runners in the community would all be eager to show their support and solidarity. But I didn't realize how quickly it would all come together. It's exciting, it's awesome. And it's just another amazing show of respect and tribute. Humbling in so many ways. Again, I'm just so amazed and inspired by the running community, not just locally, but globally.

Are you participating in this even in your city?