By Heather Iacobacci-Miller April 02, 2013
Last week I had posted pictures of a dinner Jason had made for me in a Thankful Thursday post. I know I am really lucky to have a husband who will cook, but even better, can cook really really well. He spent five years working in a French restaurant. Lucky me right? So, he definitely learned a lot. I typically do most of the cooking because he gets home later than I do, and I don't want to eat at 8 at night.

Sometimes, however, I get really burned out on cooking, trying to be creative, just spending time in the kitchen period. Last week I had one of those days. I had asked him for ideas and he tossed out a list of the ingredients we had. That sort of sent me over the edge. Yes, I knew we had those things in the fridge...thankyouverymuch.

Thankfully, he stepped up to the plate and took over. He was initially wanting a stroganoff. But ended up going a totally different direction with Shepherd's Pie. My only complaint is that he decides to get crazy creative when he gets home a little later. In other words, he starts something new that takes longer than expected, which adds up to a very hungry wife! But, at least I was well fed.

I had mentioned sharing this Shepherd's Pie recipe with you all, and I finally got him to write it down for me. Please note the newly named "fauxtatoes." He's proud of that one.

Saute onions, carrots, garlic with pepper and spices (except for the salt). Add in mushrooms and sear (for richer flavor).

Add in the seitan along with vegetable broth and bouillon cube. Allow to simmer and reduce for approximately 20 minutes or until vegetables begin to soften (al dente).

Add in the frozen peas.  Then stir in the tapioca flour to help thicken the mixture. Allow to simmer an additional 5 or until it's reached a thicker consistency.

Place the mixture into a glass baking dish. Top with the Cauliflower Mashed Fauxtatoes and sprinkle with breadcrumbs or panko (optional). Bake approximately 20 minutes, or until the fauxtatoes begin to brown then put on broil to finish browning (or you're just too hungry to wait any longer).

Pour out the water and transfer the cauliflower to the hot pot to help cook out excess moisture.

Transfer to a food processor, adding in the nutritional yeast and seasonings and puree until smooth, adding in almond milk as needed. 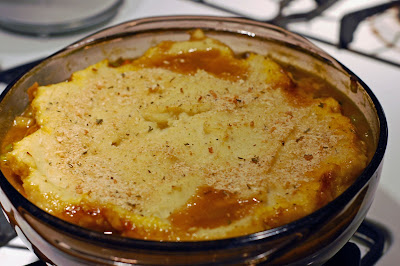 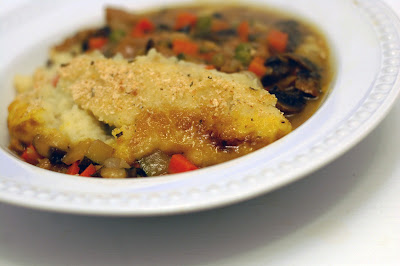 This turned out fantastic. It was warm, comforting, and filling. I've only had Shepherd's Pie once before when we were visiting friends in Seattle. I've never attempted to make it myself, but have wanted to. So, I'm glad Jason went out on a limb and got creative.