It was a pretty good weekend around here. Nice weather certainly helped. It usually does of course. I'm still trying to wrap my head around warmer running weather though. Saturday we set out for our run around 10 and it was about 60 degrees, sunny. But, I was going for 10 miles and knew it'd warm up significantly.

Jason ran the first 5 miles with me. They were nice. We don't usually talk too much, well....I do, but then stop because I realize I'm annoying him. Even not talking, it's always nice having someone by your side.

We hit the house at 5 miles. I took a quick potty breaks before heading out for the last part of my run. I assumed Jason was going to stretch then clean up. I had a great 2nd half to my run. I ran into several people who wanted to chat. Kind of awkward, but really pleasant too.

I had several fun conversations on my run actually. Oddly though, it's very rarely with a white person. Not sure why, but the white folks in my area tend to be weirdly reserved. Maybe a wave, but rarely much more. Almost like they're afraid. I don't get it because it always makes me smile more to have a returned smile, wave, nod or a full on "how are you doing?"

Anyway, there's one man who usually is taking care of a lawn on Saturday mornings. We've waved often, but he decided to talk to me this time. He always wears a big coat and mentioned it was warming up. Um..yes LOL. But it made me smile.

Later I ran passed a lady sitting out in front of her house. She confused me for someone else, because she asked where my dogs were. I just went with it and said they were at home because they were too difficult to run with. I wished her a great day and went along. And I loved the smile on her face.

I passed another guy walking with a bag of food. I was coming up from behind and waved when he turned to look as he heard me approaching. I ended up asking how he was doing, he returned with the same. Kind of funny asking a runner how they're doing really. But, I was doing a-ok.

Do you ever take time to talk to people when you're out for a run?

I hit 10 miles and was ready to get inside, get more water, and stretch. It had definitely warmed up, and I was pretty well done. I got to the door and it was locked. I knocked, the dogs barked, staring at me like I was crazy. And I realized that Jason was probably upstairs listening to a meditation CD, doing yoga, or in the shower.

I was stuck. I waited. I called the house and his phone repeatedly. I even tried to make the dogs bark again. They just stared at me. 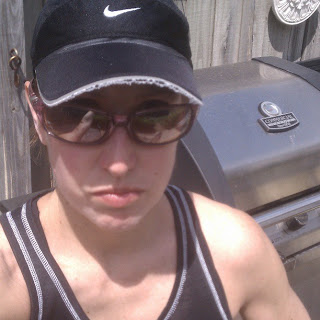 I ended up waiting 30 minutes outside before he came downstairs and realized I was outside...locked out. The look on his face was priceless. He might have been afraid to even let me in. I will say that I was trying to find the positives. It was sunny, warm, and I had sunblock on.

Just curious, how would you have reacted?

After that minor fiasco, I was pretty productive. I trimmed some hedges, weeded some flower beds, and gave the dogs a bath. Then it was time to indulge. We ended up going for a very late lunch/very early dinner at Pizza Cafe. Mostly to enjoy more outside time.

Sunday ended up being another mostly productive, outside day. I got in a weight workout for shoulders and triceps, then Cathe's Tabatacise. After that, we hit up Home Depot then spent a significant amount of time in the yard.

I got lots of plants potted as well as veggies planted in our garden. Super excited to be growing: Japanese eggplants, tomatoes, bell peppers (3 colors), herbs, and hot peppers.

So, another great weekend in the books. Sometimes the great weekends make heading into the work week harder. I do have something great to look forward to today though - BostonStrongLR run.