By Heather Iacobacci-Miller June 04, 2013
Yesterday started off on kind of a down note. It was a Blue Monday for me. I tried not to wallow in it. It was an absolutely gorgeous day out - sunny, blue skies and upper 70's. I knew I didn't need to run, so I brought up the idea of biking with Jason.

He agree that sounded like a good idea. Of course, once I committed, I immediately started to get nervous. This was only my sixth ride mind you. I still don't feel completely steady and have yet to figure out the true radius of my turns - in other words, I make obnoxiously wide turns for fear of cutting it too tight and falling.

Rather than riding from the house, which would ultimately mean lots of traffic after work and crossing trolley tracks (the cause of my first fall), we drove across a bridge and started on the river trail itself. That definitely made me more comfortable - no cars to contend with.
It wasn't a fast ride, but it was a pretty good one overall. A) I didn't fall and B) the beautiful day helped improve my mood dramatically.

I recently won Tiffany's (Love, Sweat and Beers) giveaway for a Bestowed Box and also got these fabulous goodies - the new ALT Larabars with protein courtesy of one of the sweetest gals around, Lindsay (Cotter Crunch). 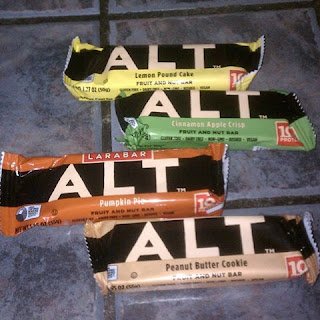 I had also taken a picture of the Bestowed Box o' goodies with my phone (big mistake), but for some reason pictures aren't always saving on my phone. Yay. It was full of great snacks to try, including some Chicken Jerky that Jason tore into before I could take a picture. Of course, I wasn't going to eat them, but I had wanted a picture of everything in tact. You'd think the husband of a blogger would know better by now ;-)

What helps you turn a blue day around?